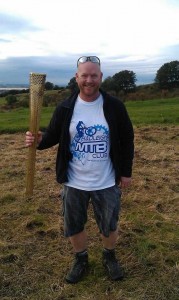 Going back to 2011, Myself, Martin Seddon & co. were completing construction of the Olympic course.
With a world press day staged on its completion in March, we were highly congratulated by Lord Coe & the worlds media. I'd hit the peak in my career and was so proud of being a part of delivering an Olympic venue in a sport I've been passionate & enjoyed for 20yrs.

The following week we were invited to tender for the 2014 Commonwealth MTB course. Whilst away my Fiancée had symptoms of a trapped nerve, which within no time, suddenly saw her admitted to hospital.
After the results from a biopsy the following week, our whole world fell apart with the news the love of my life was diagnosed with Glioblastoma Multiforme grade 4 (A very aggressive high grade brain tumor)
The Senior oncologist prognoses was a short outcome.
My Fiancé is extremely strong minded and after the initial shock, we got our thoughts together and agreed we are going to beat this!
So my research began into beating this terrible disease which I’d never met on my life's path before.
So searched everything possible and discovered that we could achieve this through correct nutrition & positive attitude, visualisation and motivation with combined chemotherapy & radiotherapy methods.
After a huge battle..2011 ended with fantastic news that the high grade tumor had dispersed.

So..  What could I do with this huge motivation I'd still got & the will to help others?

....  “I know the love I've got for the Mountain bike course I helped create”
...... “Right plan time,  I'm going to set up a Mountain bike club based at the Olympic course!”
Armed with the plan to introduce new riders from Adults to Youngsters and plans of helping charities & local businesses, Hadleigh Mountain Bike Club started being put together in January 2012 and has continued to progress with a fantastic momentum I'd always visualised.

Then before we knew it..
The Olympians arrived in a small town in Essex and put on a fantastic display of athleticism which was show-cased across the world.. putting Hadleigh on the map for being the most spectator friendly world class XC venue in the world.

Our club started Happy Monday TGB rides in May with 12 riders in two groups then hit peak numbers late August at over 65 riders with 4 groups enjoying the great loop of local trails.
The Easy like Sunday morning rides from new local bike shop Velo Virtuoso in Hadleigh began in September mainly aimed at beginners has became really successful & will continue to into the future.
In October, HMTBC members supported the under 16's British Cycling Inter-regional youth MTB championships at Hadleigh, which was a brilliant event and was inspiring watching the next generation of elite riders being the first riders taking on parts of the Olympic course since August.

Currently Weekly coaching sessions on the course now keep the venues/2012 momentum.  We have great plans in 2013, one of which is introducing and coaching youngsters/Adults.

The London 2012 motto was
'inspire a generation'
It certainly has & we'll continue to do so at Hadleigh & beyond....

What a journey.. What a future.
Whatever life throws at you..
Stay strong, be supportive, have a positive outlook.

My fiancée has suffered permanent nerve damage from the aggressive tumor which effects her left side movement, thankfully the tumor isn't active so we cherish every moment together and continue to do everything possible to ensure a quality of life.

My motivation for the club continues.. With the aim to make it the most exciting & successful mountain bike club within in the UK.

I cannot thank everyone enough who has supported and has/is contributed highly towards getting our fantastic Legacy Club moving into the right direction.