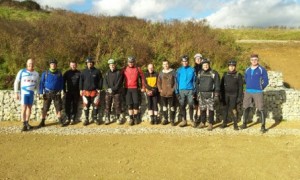 To say I was somewhat surprised to see an e-mail from Glenn that Friday morning asking me if I could make myself available to ride the Olympic course on Saturday under the watchful eyes of two coaches, would be an understatement to say the very least.

So it turns out that as we are going to be associated with the park, Hadleigh MTB Club was selected to be the first people on a coaching tour of the course (lemmings springs to mind). After sorting out who were paid up members and who were not yet, finally we were down to twelve lucky people who could make the Saturday morning session.  Now I’m not a very technically gifted rider, fitness yes not but that is about it for me; so now I start thinking about the course and what the features are.  I mean we are talking about riding an Olympic course where even the worlds best riders crashed and broke bones.  It’s at this point when I’m starting to think of excuses as to why I could not possibly complete the section’s when my phone rang.  It was me good mate and fellow xc racer Pete Shrimplin also going on the morning course also having kittens about riding the track.  I’m glad I ain’t the only one who after jumping at the chance to ride was now having second thoughts especially in front of friends who lets face it, would mock and take the micky for all time should we do anything silly.  So we decided that eh we’ll go act all cool and if at the last second we didn’t want to do a feature then it’s far cooler to say no than to being in plaster for six weeks.

At five o’clock in the morning I am awake, I’d had a dream but not just any dream; a falling dream; a falling dream on the bike after I tried to ride up a rock face.  After a couple of coffees and a quick change of tyres on the bike, I quickly slid the summer tyres back on for extra grip on them rocks & with the wife in the car off we go To Hadleigh.  After meeting the others and having started the banter we all went off to meet our coaches for the day. John & Tom turned out to be really nice chaps, John was a BMX racer with our very own Jez and Tom is a current world 4X rider and both run training courses at Codham and Chicksands respectively.  We had to undertake a skills session before we were even allowed to ride any part of the course, which consisted of riding between cones, front and rear wheel lifts, bunny hops, slalom and riding on a plank.  All but the plank was easy I just could not keep my balance on it but I got through it so my riding wasn’t that bad.

The first feature we headed to was the sweeping down hill turns with the small jumps, easy I hear you all say, is it? When you look at the turns they are so steep and added to that the damage that the cows of done to the track, hoof holes everywhere; cow pats on the racing line, I’m sure Absalon didn’t have to put with this. So off we went bumbling down the track a couple jumped the rock placed in the middle of the track; but me no, bottled it, but I wasn’t going to be beaten by such a tiny rock, so back to the top and this time nailed it like it wasn’t even there. So back up to the top again and watched as Jez (our star rider) headed off down the track at a good pace, when he disappeared behind a mound but instead of reappearing the other side I saw a back wheel in the air, then the front, then the rear again.  Carrying a little too much speed and not being able to use the banking of the turns due to the hoof holes Jez have tried to pull it tight in a turn but lost grip and down he went.  Cuts and grazes were evident what we didn’t see was the concussion that he later had diagnosed, still it saves getting drunk.

Next up “Oak Tree Drop” this was the one I wanted to nail, after seeing twelve year old girls do it with ease I couldn’t leave the course without having done it, so after watching Tom and John making it look effortless and others in the group giving it a go and nearly crashing to the top I went. I bottled it again on my first attempt (something which I did at every feature that day) but with my wife there I had to prove what a man I was so over the top of the drop and now there is no turning back, off the brakes, lower the heels and wrists & pick the smooth line and down the drop I go, I think it was the words of encouragement from Tom at the top that did it, he said that being on the 29er my bike should be the easiest bike to ride it on’ due to the larger circumference of the wheels smoothing the obstacle out.  After landing the bike back onto the course and a few well done’s it was back to the top for another go, when with an almighty “aaaarrrrrr” rang out Steve Owen landed in a heap on the track just in front of me, bruised and battered and later noticing he had been bitten by his outer chain ring, the resulting 3 gashes and 10 stitches need later that day.  So rode up the B line only so miss judge crossing over the grass between the two lines and I was forced to have a little lie down, much to everyone’s amusement.  So back on to two wheels and back down the drop this time a little quicker and much more confident, then out over the rabbit warren on the smoother rock line and up to the final drop on the course; which may be steep with a root half way down but is not too much of a challenge.

After a quick break up to “Triple Trouble” now this was the very first time I’ve seen it in the flesh, so to speak.  After wobbling down the C line a couple of times it was now time to take the B line and yes bottled it first attempt but nailed it twice before we left the feature, with only Jez doing the A line, respect to him.  Monument was similar with only Jez trying to ride it and making it look so simple I was tempted to give it a go, but no next time maybe.

Then onto “Deans Drop” B line ridden first then a switch over the track so starting on B line switch over to A line after the difficult rock section, then the barriers were removed for people to try the full A line, which a few did and Pete’s one handed endo was something to behold in the rock section.

The north shore section was next, not much to it really and everyone made light work of the B line, a few went straight for the A line jump which does look fairly easy.  I don’t know why but it took me an absolute age to pluck up the courage to attempt this, but glad I did, back wheel hit heavily on the landing ramp edge simply because I only lifted the front wheel and not hopped on the take off, but over the 7 foot gap I had jumped.

I think by now the energy levels were slipping and with work beckoning it was time to depart although we could have stayed and done the whole course with ‘Leap of Faith’ and the ‘Rock Garden’ still to be ridden, but I will savour these for my return next year.

So what did I learn? a lot really; have confidence in your ability firstly, next leave your brakes alone, too little speed is worse than too much on this course and these features will bite if your not committed, they also bite when you are; so go along sign up for this coaching session you’ll love it. After all how many people have actually ridden an Olympic XC Track, I for one have!