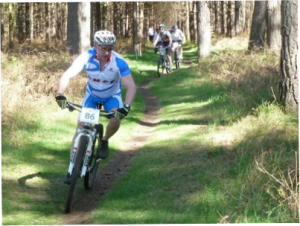 After the fun and excitement of the previous day’s biking (more on that in an upcoming blog), it was back to reality when my alarm went off at six o’clock on this damp Sunday morning, still black as dawn hadn’t even considered breaking yet.  My usual two cups of coffee and my yoga exercises and cut a huge lump of banana & cherry cake which my good wife had baked the previous day and into the van I jumped.

Driving up to Thetford I always take the scenic route up through Sudbury and Bury St Edmunds so an hour and a half to load up on the cake and the High 5 drinks I was trying for the first time in this race.  Arriving at fire road 6 after having weather reports all week from Steve McWhinnie we already knew it had been wet all week, but this side of the forest does drain well.  Walking to sign on I saw the very cold Rachel Mashford manning (womening) the Velo Virtuoso stand, whilst Sam was riding a practise lap, so upon his return he said course was fairly dry and rode well.  Okay all round tyres to stay on then, so about 10 o’clock the rain started and didn’t stop for hours.

Sitting on the start line wearing a rain jacket knowing that I would overheat on the first lap, my plan was to stop at the Velo tent (which was backed onto the track) and dump the jacket at the end of lap one.  The race set off at a half decent pace, but it wasn’t long before Chris Adams & Dave Wales slipped past, now knowing that these two old boys are quicker than me I thought I’d tag onto the back of them.  The first lap went well and Sam came past me just before the end of the lap, so with both of us dumping excess clothing on to his sister a quick slurp of High 5 Fructose 2:1 and off I go again.  Now my first mistake of the day, taking off the rain jacket; yes I was hot wearing it but the cotton undershirt I was wearing was wet within half a mile and taking on more water than should have been possible.  Catching Chris we rode together for a while until my foot was shot out of the cleat after clipping a hidden stump, now my bike had developed a front end knock, every bump knocked, I tried a small wheel lift and saw the front wheel wobble.  Oh, that’s not right so I stopped and lost Chris’ wheel but did notice that when I hit the stump I also undid my quick release skewer for the front wheel, how lucky am I that the wheel didn’t just fall out when I did the wheel lift.

Back under pedal and trying to push; every corner which should have been banked slightly was now a two wheel drift zone, lost the back end on one and with a trailing foot in full speedway style off I went into the undergrowth for a little diversion.  At the hardest part of the course ‘the plumb buster climb’ 3 one hour riders walking right on the racing line, sorry but if you can’t ride for 1 lap don’t enter even better walk at the side and let them that can do it ; do it; without interruption.  On to lap three, a quick chat with Chris again as we cycled around, I thought I’m doing well here staying with him on his single speed (much respect to all SS riders) but the cold was now setting in and I started to slow, lost Chris’ wheel and started to struggle, not sure if it was the lack of gels with this new nutrition scheme I was trying, by now I should have done my two litres of drink, but couldn’t drink anymore and had loads left in the camelback.  I came across Sam riding one handed and he explained about his elbow injury and lack of brakes, but I think we all had braking issues riding through the Thetford grinding paste.

Lap four stated great, although legs aching, I set off through the 1 mile marker but at about the 2 mile board things had changed.  I have heard about marathon runners hitting a wall, well it is a huge wall to hit I can tell you, I struggled to even turn the pedals.  I had to walk for a while, jumped back on and within half a mile I was shot again. Mistake number 2, No gels left (I think when pulling them out my holder I lost a couple) and with my camelback now running empty so no more carbs to be had I knew it was going to be a long lap.  Because my pace had slowed also my core temperature had also dropped which is a fairly dangerous place to be; so by walking/running and a little cycling I made 3 miles then 4 miles; 5 and 6 came and with the knowledge that I was only 1 mile from the finish with only the plumb buster and the final gravel fire road to do one foot after the other I set off, only to end up falling over and having to lie there on the wet grass nothing left in the tank.  Thanks to the rider who with a little encouragement with “come on bud nearly there” I set off again.  I also couldn’t believe how many times I had to take a nature stop.  I think somehow over night the good old English had been reclassified and was now almost twice the distance of the previous day, they never mentioned it on the news on the drive up to Thetford, or do Norfolk and Suffolk have a different measuring system to Essex.  Out of the top of the plumb buster and a short grass section track on to the gravel climb, I managed to ride these and actually knowing that I would soon be finished the energy came back and I flew up the climb to cross the line with 15 minutes of race left, but that for me was it, four laps done but my fourth lap of nearly 1hour 20 minutes was enough for me, twice the time of my first 2 laps.  Cold, Hungry and emotional off I went back to the van to change into dry warm clothes and wash the bike down whilst still wet. Warmed up now but feet like ice a hot coffee in my hand and a tuna sandwich, life returned to normal and then hearing about everyone else’s race we set off to see the results, 28 out of 43 I think, is a half decent result, top half of the field is what I aim for, but it was probably the toughest race I’ve done, mentally.

So for round 2, what will I do, I will revert back to my usual feeding scheme, but I will make sure I stop and actually eat something solid, not just gels or liquids at around half distance/ lap three, then maybe I can actually do full race distance of four hours and not quit like I have in the previous 2 four hour races I have entered.

Now 5 days rest and rebuild with a gentle swim on Friday before heading back down to west London for the Gorrick Autumn series race 2, 3 lap sprint race this time and will give me a chance to improve my single track skills, catch you later fellow mud monkeys