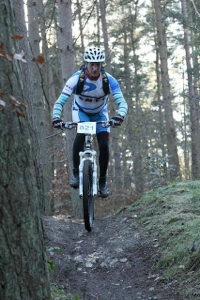 It was cold, not just cold but very cold, I’m sure I saw penguins at one point huddled together to keep warm either that or a remake of nuns on the run was being filmed in Thetford forest.  Usual early start; up at 6am for my coffee, beetroot juice, muesli and more coffee breakfast; before I ventured out into the frozen Leigh-on-Sea air to defrost the van.  Peering through the misty windscreen with blurry eyes still; I make my way up to the Suffolk/Norfolk border, and watching the outside temperature gauge on the van climb as slow as a sloth from -3 to -1 by time I was parking in the High lodge arena.

With Sam on baby arrival duties I popped over to see Guy and Rachel setting up the Velo Virtuoso stand (poor Rach was freezing she needs a heater; if only we knew someone who was selling a cheap generator which could power a nice heater for her).  With only 2 other Hadleigh MTB Club members racing; I had a little ride until Pete and Paul showed up.  Being sensible I’d backed the van up against the feeding station so we arranged our supplies around the back of the van and headed off for the start of this 4 hour marathon ride.

With the temperature still below freezing I kept my jacket on for the 1st lap again, no point getting too cold, but with my new Leicester Tigers base layer on I was toasty along with my toasty feet in my new NW Celsius boots as well.  Off we set along the very long straight frozen flint lined fire road which immediately claim a number of riders with punctures, a scene which was to keep playing out through the entire race. A sharp right turn more fire road before we hit the most talked about corner in recent MTBing history, “Ice Corner” didn’t cause anyone a problem on lap 1, but there after it was a constant stream of riders having  a little lay down (me included on lap 2, thanks for putting the photo’s on face book guys). The rest of the lap consisted of single track through the pine tree’s; fire roads; an absolutely horrible little section where the line was in a deep rut but what made it worse was the bright sunlight in your eyes blinding your sight as you try to navigate a path either side of the trench that was the racing line. 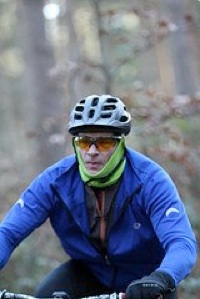 My favorite section of any course I’ve ridden was from the Flint pit right through to the end of the MX trail;  a lovely flowing section with undulations galore and a fast as you like single track section which you just have to pin it and have faith in your ability and tyres.  Next up the section that on lap one I hated but by the end of my 7th lap actually improved, a long draggy climb through the fallen leaves made it hard work but as the race went on the leaves cleared and the track actually got easier.  By now we are only a couple of miles from the end of the lap but the track was slow with lots of roots and soft mud where the ice had thawed in the sunlight only to be frozen solid earth around the next corner in the shade. Very unpredictable riding but the course is the same for all riders, I had tried to stay with Pete Shrimplin on lap one but he just pulled clear of me and eventually I lost sight of him and a good result of 22nd was his reward, I came home in 30thsame number of laps; 7 and Paul Howell was 32nd with 6 laps completed, but with about 60 entered in our class only 33 were given as finishers, as I mentioned earlier punctures were rife throughout the race with the winner of our class having 2 punctures and still completing 9 laps in total.  I had a quick pit stop at the end of my fourth lap to grab a couple of oat bars and top up my water, the water was fine as it had been on the bumper of the van but my oat bars were frozen solid as they had been on the floor, I stuffed one in my back pocket to defrost and munched on the frozen morsel as I started my 5th lap.

With the race coming to a close and with me telling my self this is my last lap, I entered the arena at 3 hours 45 minutes, so had another lap to complete which at the end of the day I’m glad I did, but 4 hours 27 minutes and 57 seconds on a bike in sub zero conditions was true character building. When I got back into the van for my drive home the temp gauge still only read 0.5 and stayed that way pretty much all the way home.

So with a month off taking it easy (except for our little visit to Bedgebury  with Pete and Michael Travers) I can eat normal food and even have a pint or two, especially over the festive period then it’s off to Tunstall forest on 30th December for their duff the stuffing ride; a good training and sighting ride ahead of round one of MSG in March held there; before we hit Thetford at the end of January for another cold long race, with me standing at 21st in the championship I need a good ride to get inside the top 20 and be gridded for the final race in February.

Till next time my fellow frozen mud monkeys.