What are the benefits ?? 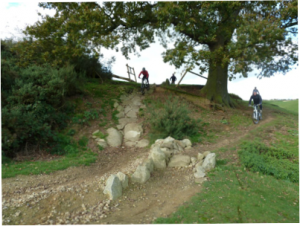 'Could you tell me what are the benefits (if any) of joining the club'!!!

No matter what bike I have owned be it Road, Hybrid and even mountain bike I’ve never been what you call a mountain biker.

Now although I was probably above average cycling fitness wise through commuting to and from work and the weekend long road runs, Closest I have come to mountain biking is riding along an off road path that you could quite easily ride along on any bike.

Inspired by location of the Olympic 2012 Mountain Bike venue at Hadleigh Farm being local to me, a few weeks after decided to head down to the Ten Green Bottles where the Hadleigh Mountain Bike Group was in its infancy and join them for a Monday evening group ride.

My first ride with them on August the 27th, now with tips, tricks and listening and watching all the other riders on the different rides, I have entered a couple of “Cyclocross bring any bike” races, Got used to riding in steep, muddy, technical sections and night riding.

After becoming a member, a couple of weeks later on the 3rd November there was one more thing, err what was it?

Oh yeah I got to ride the “frigging” Olympic Mountain Bike Course Technical Sections and coached by John Stockwell from ATB Coaching and Tom Dowie. John is a former BMX National Champion and Pro 4X.

Thanks ECC and all at Hadleigh Mountain Bike Group.