Ironically, it was when I got back from a snowboarding holiday in the French Alps that I first thought the planned 55 mile assault on the Taff Trail on the 26th Jan might not be a good idea.  The reason for this, of course, was the large amount of said white flaky stuff that had fallen on the UK, particularly Wales.

Monday night's usual ride further confirmed my doubts, spending 90% of the 10 miles either going sideways on ice or getting stuck in crusty snow. That 10 miles felt more like 30 due to the drag on my mud tyres and to top it all we had only received about 20% of the snow that awaited in Wales.

Wednesday morning and the local snow was starting, inevitably, to thaw.  This wonder of global warming had 2 effects, firstly turning the once muddy mess of our local trails back to their former muddy messiness and secondly, leaving no excuses for the lovely people at UPS to deliver a shiny new Garmin 800 to my door. 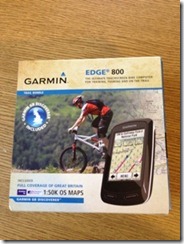 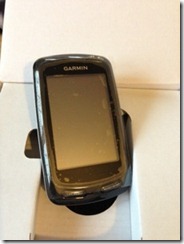 Still thinking the Taff Trail was a bad idea, at least now I was prepared for the navigation part of it with full UK OS Maps in the surprisingly neat little unit that the 800 is.  This of course was important as I did not have a Skidoo and was convinced all the sign posts would be covered in feet of snow.

After unboxing it and sticking it on charge, I was straight to the bike to put on the handlebar/stem mount which like all of the newer Garmin mounts was the small coin sized quarter turn affair that is mounted using rubber bands (Garmin had a posh name for them but it escapes me now).  That done, it was back to my desk to have a play.  I must say at this point, my everyday bike computer for the past few years has been a Garmin 705 so comparison was bound to be my starting point.  The 800 is only very slightly bigger than the 705 which surprised me as having read about the touch screen and full colour OS maps, I had expected something much bigger.

After power on the Garmin starts up pretty quickly and begins it's search of the sky for satellites. This is something which, like the 705, does seem to take longer than it needs to compared to even an average smart phone for example.  Satellites found however (you don't have to wait if you don't want to) a remarkably simple menu system is displayed showing pretty much what is expected.  Where To? / Training / History / Courses and Setup.  A quick flick though the menus had my bike and my vital statistics set including units of speed, distance and what do do when I stop and start.  One thing I did notice here is how clear and bright the screen is although I turned the brightness down as low as I thought would still be visible outside in the hope the battery might stretch to last the whole of my upcoming day of slow snowy pain.

Garmin 800 and GoPro Hero 3 (review coming soon) on charge it was time for a cheeky beer before bed, tomorrow was going to be interesting.

The next morning we were up at dawn for a breakfast of strong coffee and Weetabix before loading the bikes on another member of the Land Rover family and heading off down to the start of the trail on the canal side in Brecon. 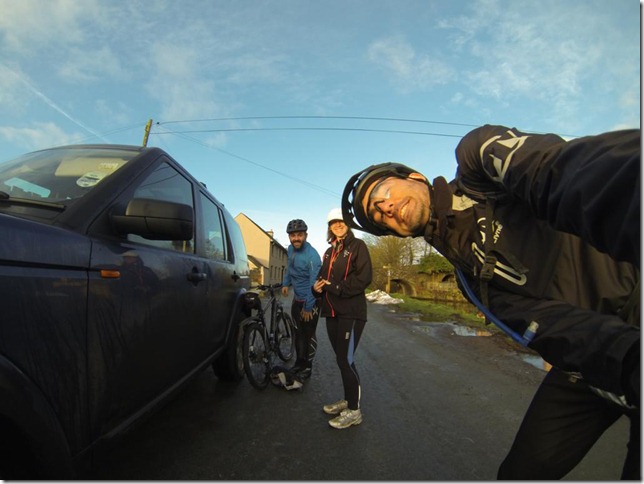 Garmin powered up, helmet on and bikes checked we started out 55 mile journey to Cardiff and immediately there were hazards.  The canal tow path was peppered with patches of sheet ice and neither of us was really up for a morning swim.  Care and sense prevailed and we started making progress.  I was immediately impressed with the mapping on the Garmin 800 especially about 7 miles in when it started shouting (beeping) at us that we had missed a turning and were now "Off Course".  A quick check on the maps found our error but also a few weaknesses with the Garmin. I found the zoom in and out features a little slow and moving the map around by dragging a gloved finger over the screen (thank you Garmin for not using a capacitive screen) proved slow to redraw our location.  Location found however we turned around only to take a wrong turn 100 yards later (my fault not the Garmin) resulting in a 2 mile climb, to the top of one of the Beacons where we should have been gently climbing alongside a lake. 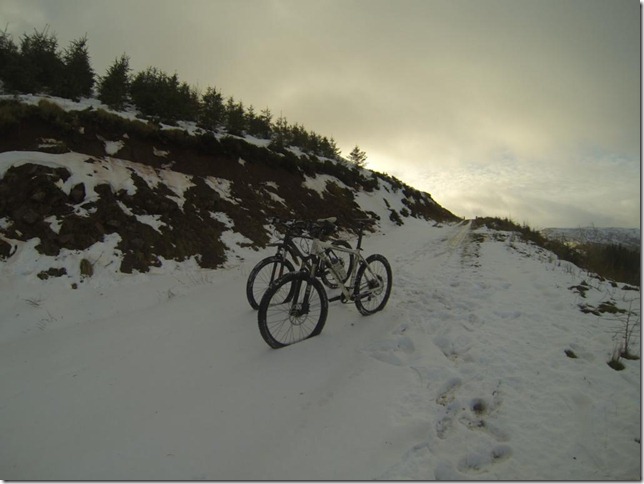 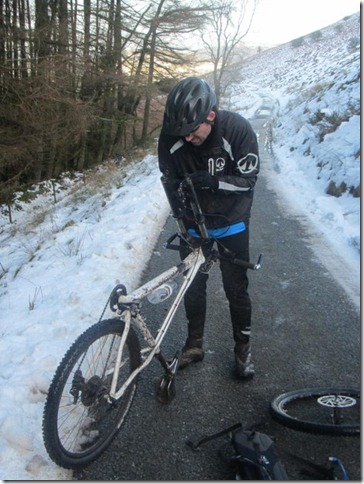 Apart from suffering a frozen/ceased front brake resulting in removal of my front brake disc, there were rewards for our (my) mistake and this horrendous riding, walking and trudging in knee deep snow ascent of the Beacons.  The incredible view from the top, some comedy moments trying to vault dry stone walls and the most memorable narrow, rocky, technical descent back down to the lake.  I was properly in my element here, this was real mountain biking. Once again, it was thanks to the Garmin that we found this amazing descent which was an old footpath being actively washed away by melting snow.  Ace! 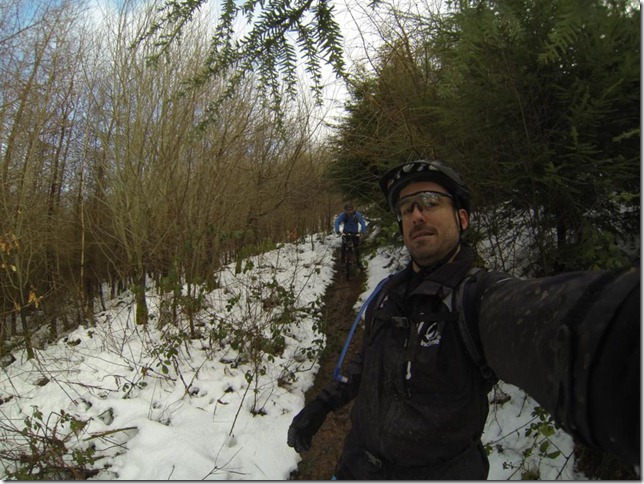 Back on track and the next few miles slowly clocked up, riding where we could, walking where we couldn't.  We were sure this snow/ice covering could not last all the way to Cardiff so spirits were high, kept so by laughing a lot every time one of us nearly fell off which happened a lot, or did fall off, which also......  You get the idea. 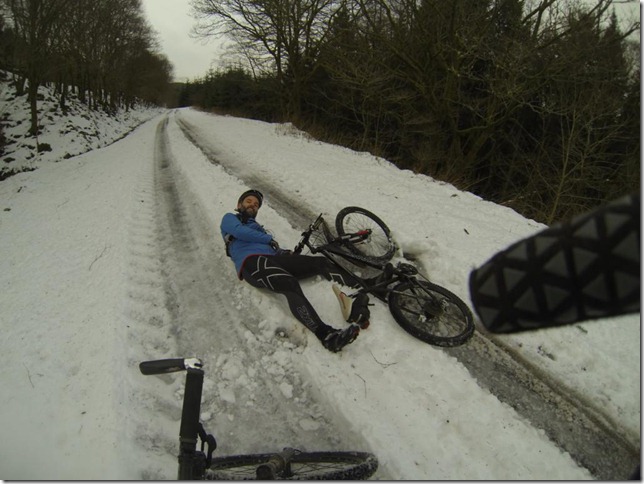 As we descended out of the Beacons the going got a little better for a while and I had time to play with some of the features of the 800 and started swiping my finger across the screen.  There are 5 default views consisting of Maps, 2 views of Time/Distance/Calories/etc., Ascent/Descent and one that was currently telling me we were 1.5 hours behind our target.  As we had not set a target, a useful feature for comparing rides or improving on a course, I presumed that this was the time of the runners whose GPX route I had loaded.  This also reinforced how bad the conditions were as we were on wheels and they had been on foot. 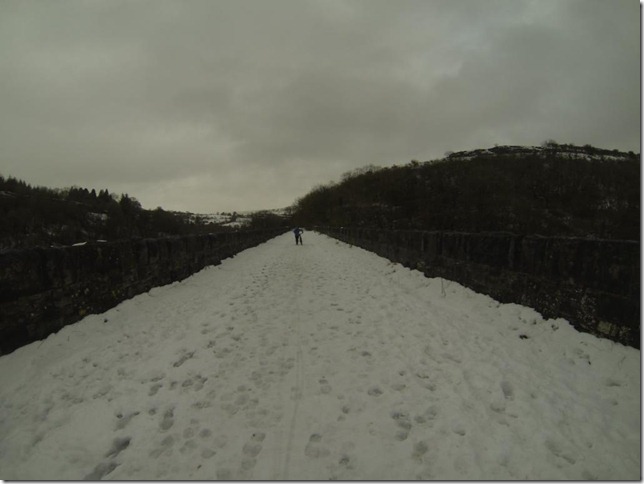 As Chris mentions in his blog post about our journey (www.24fifty.com/2013/02/the-taff-trail.html) we were expecting the lower part of the journey to be a little boring as most of it is national cycle route 8 and tarmacked, multi use pathways.  We were both surprised however by the route managing to stay interesting, following the old railway lines and river away from noisy roads and traffic, passing many old bridges and structures, some even bearing the name of Isambard Brunell.  The fun factor was also kept high by the seemingly unending covering of ice which made for comedic and very concentrated riding. 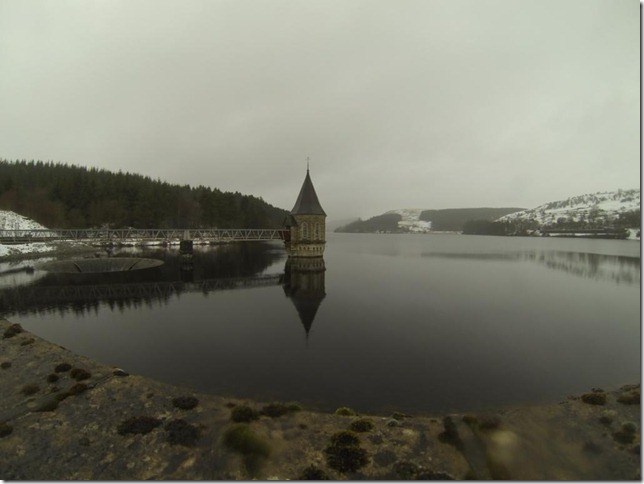 As we approached the outskirts of Cardiff, Chris decided to disagree with the Garmin and turn left off Cycle route 8 and take us up a big offroad climb.  To be fair to him it was signposted "Taff Trail" so apart from whinging about my legs, I duly followed.  As it turned out, the Garmin was not wrong and the climb we were doing is seen as an "optional" section of the route.  Like our previous climb, we were rewarded at the top by another cool technical descent and a full frame view of, in my opinion, the most beautiful castle in the UK and a personal childhood memory. 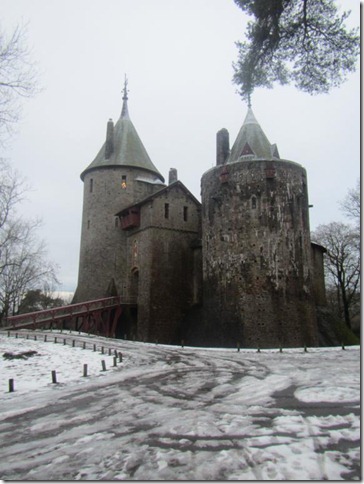 Downhill from the castle, the Garmin bleeped triumphantly that we were back "On Course", the ice and snow had all but gone and we followed cycle route 8 down to the Millennium stadium.

It had been 8 hours since we left Chris' car at the side of he canal, it felt like days, the knee deep snow, ice and falling off were but a distant memory.  We had made it and in the most difficult conditions.  More surprising to me however was the Garmin was still powered on and still had some (although not much) battery left for me to sum up our day. 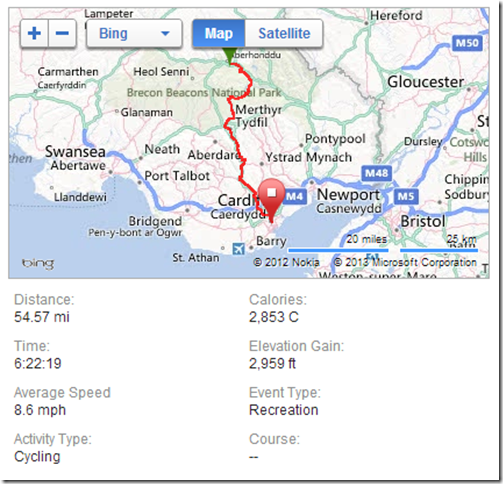 To sum up the Taff Trail:  Its beautiful, picturesque, fun, not too challenging, has plenty of option for adding extra bits and most of all, a ride I will remember for many many years.  DO NOT however attempt it after several inches of snow have turned to crust and ice.

To sum up the Garmin 800:  it's a surprisingly compact, great looking cycle computer with full OS mapping, some cool features, a great touch screen (that works with gloves) and a battery that lasts all day.  The only negative for me was the screen update time when browsing the maps, this may however be due to the speed of the memory card and I will try a faster one and get back to you on that.

I will certainly be going back to do the Trail again but in the summer when all the 'orrible white stuff is gone !