"I am stronger than steel, stiffer than aluminum, have more impact strength than carbon fibre, can be eaten, drunk, used to make medicine, paper, textiles musical instruments and scaffolding"

What if we add "I am also the staple diet of the Giant Panda, a species of grass and used to make Mountain Bikes....."? 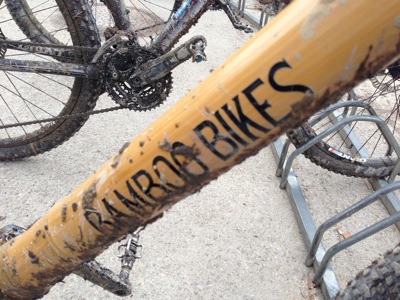 Now before we start, lets get some facts on the table. Bamboo is a very versatile material, that is clear to see.  All of the above statements are true, from gravity defying scaffolding up the sides of sky scrapers in Hong Kong, to ancient Chinese medicine to Mountain bikes made in Yorkshire.....  We all, of course, already knew about the Panda..

The object of this review and of my pet panda's desires, was I to have one, is a bonefide mountain bike with a frame made almost entirely of Bamboo.  The creator of this madness?... Rachel Hammond from Scarborough based, Bamboo Bikes.

Is it madness however?  That is what we are here to find out.

A quick trip around the Interweb reveals that bamboo has been used in bikes before and to great success by a company called Calfee making beautiful road bikes from said grassy substance, Rachel, in-fact, cites this as one of here influences having owned one for several years.  What we are talking about here though is a Mountain Bike and we all know that's a different kettle of ball games...My original plan was to head down to London's Bamboo Bike reseller, Blue Door bikes to have a ride and give you a brief impression of what this thing is made of (Bamboo obviously), however thanks to a series of unfortunate/fortunate events, this review can be a whole lot longer.....

I felt at odds with myself on the drive to London to pick up the bike.  Here I was driving to the big smoke, in my (carbon footprint of a small nation) Range Rover to pick up a bike that was largely 'grown' in the ground and more sustainable than the wind, as anyone who has ever tried to get rid of bamboo from their garden will know.  My guilt subsided when I started to think about the 2 whole weeks I was allowed to have the bike and also that I was picking it up, not from the London reseller, but from Rachel herself..

Once finally parked, travelling by bike in London is much easier, I met Rachel headed for the nearest coffee shop to sit down and get my questions answered.  What? Who? Why? Where? When? How?  Lets answer those questions right now.

We bid farewell and I loaded the bike onto the roof of the carbon footprint (Range Rover).  At least I tried to…   Annoyingly, the Thule rack does not accept a 15mm thru axle, so into the boot the bike went and we headed for home.....

On the way home, I made a stop in my local bike shop Velo Virtuoso to show them the bike.  I had been talking about it for weeks so seemed only fair.  The reaction the bike received was typical of the reaction it has had almost everywhere I have been since..   "I think I like it but I'm not sure",  "It's certainly different", "Is that parcel tape holding it together?", "Is it heavy?", "Will it rot in this weather?", "Will it break?"   I found myself jumping to the bike's defence and I had not even ridden it properly yet.  I think the passion and enthusiasm had rubbed off on me a little and I am big on supporting local enterprise so I hoped that my defence was not unfounded.

My first outing on the Bamboo bike was certainly a baptism of fire (or ice and mud to be precise). It was a very cold and muddy evening ride with some members of the Hadleigh MTB Club.  This is a regular ride that sees anything between 2 and 60 of us take to the local trails on a Monday night, the number of people directly correlating to the weather at the time.  Monday was particularly cold and with melting snow and ice everywhere, a particularly muddy one too.  The tyres on the Bamboo were my immediate concern as they were Rubena Scyllas which even new are not exactly mud tyres and these were used, there was no time to change them however so I would grin and bare it. 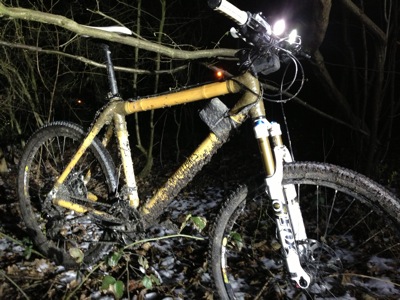 Lights on full, it was off into the mud and my first reaction was how stiff the frame felt, every push on the pedal resulted in instant forward motion, no slack or twist in the frame at all.  This made for very quick progress on the harder forest trails, aided ironically by the bad choice of tyres.  It was not long however before we got to the mud and this is where the tyres fell down.  Grip was almost non existant in the sloppy stuff (these are not mud tyres) and I spent as much time going sideways as forwards.  Two things became very obvious here though: 1.  It was great fun and good for honing my bike control skills and 2. The Bamboo bike is extremely agile due to that stiff frame.  Back on the harder surfaces I also noticed that the bike does a good job of ironing out the smaller bumps and in some respects feels like a titanium bike would

We swapped bikes over between a few of us and everyone agreed the bike felt fast and agile yet forgiving, opinion was still divided over the looks however, that was one for the pub later on.  One thing we all agreed on though is that this bike looks great when it's muddy and feels almost more at home and at one with it's surroundings.The next big outing for the Bamboo bike was supposed to see it (and me) take on the jumps and bomb holes of Danbury.  When we got there however it was way too muddy to do any justice to any of the downhill runs so we just did the XC.  It was also the first outing on my new Kinesis bike so that was my steed for the day and the Bamboo remained securely in the back of the Carbon Footprint. 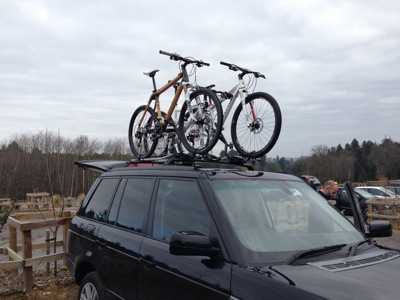 Week 2 saw me and my new found friend joining an outing to Bedgebury where around 30 of us spent the day riding the 'almost' dry trails interspersed with chocolate bars and cups of tea from the cafe.  This was the day that saw the Bamboo bike really come into its own.  The Rubena Scylla Racing tyres now started to make sense, the drying trails providing enough grip to be confident in the corners and over the huge number of exposed roots, there were only a few places where there was still real mud but we will ignore those.  Riding the Bamboo Bike in the dry, on twisting single track was a joy, the stiffness of the frame providing instant acceleration and climbing with the forks locked out was as good as any metal bike I have ever ridden.  There were a lot of exposed roots on the trails making for a very bumpy, and sometimes technical, ride, the Fox forks up front did their job well and felt a perfect match to the frame giving me every confidence to push on even over the most bumpy sections.  One negative I did notice was a lot of chain slap over the bumps and it did try to part company from the rings a few times, this was probably more noticeable as my daily ride is a 1x10 setup with a clutched derailleur and this was a 3x10 XT jobbie.. 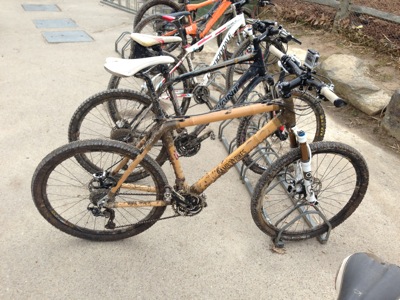 There is no doubt that the Bamboo Bike attracts a lot of attention and there were many conversations within our group about is construction, how it looked and how it rides.  I, after nearly 2 weeks and a good few miles, am still positive on all three counts.  Why was I musing about this again?   It was one of the trails at Bedgebury that did it,  I'll let the picture below do the talking: 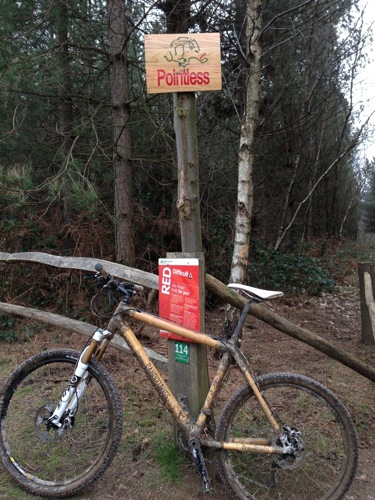 OK, there is a question mark missing but the answer is quite simply - No!

The final section of the single track loop at Bedgebury is called "Again, Again" and consists of a purpose built trail with berms and jumps all the way down. When we got to the end, the name made perfect sense as all I wanted to do was do it again.  The bike was great over the gravel surface feeling really smooth and totally composed in the jumps and through the berms.  I had more confidence than I expected enabling me to really press on however a later check of Strava showed we were not really pressing on and were clearly more tired than first thought.  Still it felt great and reinforced my respect for the bike made of grass.

My final day with the Bamboo bike was a cold one and I was lucky enough to gain access to Hadleigh Farm and the track used for last year's highly acclaimed Olympic MTB events. Unfortunately, for now the track is closed to the public and most of the 'obstacles' are gated off so as to prevent over keen MTBers gaining access to the track and shortly later to the local A&E.  I had a last quick ride of the bike over the less technical bits of the track which are mainly surfaced in gravel and the odd small rock bump and jump and my opinion remains: This really is a competent bike which is comfortable with anything you throw at it. 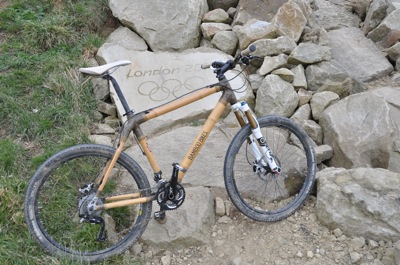 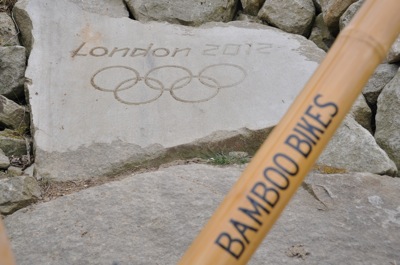 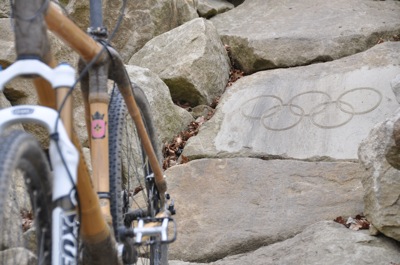 So the question remains: Would I buy one?

Well, yes and no, it's a bike that divides opinion on every level except actually riding it.  Personally I thought £1199 for the frame only was a little steep, however it is hand made in the UK and sustainable so somehow seems worth it.  There is also no denying the credentials of Bamboo as a construction material however it's quirky and different so difficult to make a purchase decision over a more traditional 'metal' bike.  Finally I have come to the conclusion that as I already have several bikes made of light metal, heavy metal, plastic and carbon why not add one made of Bamboo to the collection?  With Bamboo Bikes current offer of half price frames, I might just be thinking about a CX version.  Alternatively, whilst giving the bike a final clean before packing it up I had a thought…..

"I could send them back an empty box and hang onto this one.  :)"
We use Cookies - By using this site or closing this you agree to our Cookies policy.