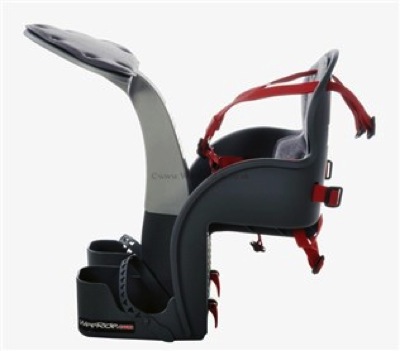 Back in the mid to late 80's I was in my late teens, the fittest I have ever been and as well as being an A' Level student, I was a mountain biker racer.  I raced most weekends throughout South Wales, the Forest of Dean and surrounding areas and that was my life.  My school's 'games' consisted of Rugby in the Winter and Cricket in the Summer and that was it, I however got special dispensation (one of only 2 in the school) to ride my MTB during games and was trusted to do so.

Throughout this time and for another 15 years the thought of having a child was an alien one to me, I was often heard saying "I'll never have children" or "Not for me".  The mountain biking took a back seat during and after university when I moved away from the biking mecca that is the Forest of Dean and for a while, cycling all together left my daily life.

Roll forward to 2008 and the fitness bug bit again only this time it was mainly running.  After a couple of years, several marathons and one amazing cycling trip to the Alps, I decided the bike was my preferred mode of transport and wanted to get back into all things cycling.  It was also about this time that my wife and I had decided it may be time after all to try for a child.  Never say never…..

Since the birth of our lovely daughter Sophia 1 year ago I have really got back into cycling, specifically mountain biking.  Another birth took place last year too, that was the birth of the Hadleigh Mountain Bike Club. Based on the legacy of London 2012, the Olympic track being only 3 miles from my house, I wanted to be a part of it for sure.  Me becoming a part of the club, riding more and more and wanting my family involved has lead to where I am now and to writing this review.

Being 1, my daughter is now old enough to come out on the bike with me but with so many options of how to carry, push, tow and generally transport her, which is the best?  We started looking at seats that attached to the bike as, in my opinion, all that towing them in a trailer is a bit boring and she is too young for a tag along type bike attached to the rear of mine.  There seems to be 3 options for this type of seat, behind you, in front of you (on the bars) or between your legs (on the cross bar).  After immediately discounting the 'behind you' option primarily because I thought "who wants to stare at my back whilst riding" and also it would be difficult to interact with her whilst behind me, we started looking at front mounted options.

Coincidentally, it was at this time my work with the Hadleigh Mountain Bike club and it's supporters and sponsors led me to WeeRide UK who are the UK distributor for several child safety products from, amongst others, the WeeRide brand.  A couple of days later, their latest offering, the WeeRide Front Safe arrived at HMTBC towers and it was time to get testing. (yes this is a product test and not a life story but you know I like a story)

WeeRide offer 2 mid mounted, front facing child safety seats, each coming in 2 variants, Standard and Deluxe. The 4 different models can be seen on their website at http://www.weerideuk.co.uk/  The product we have for test is the WeeRide Front Safe Standard which, in the middle of the range, probably makes it the most popular choice. 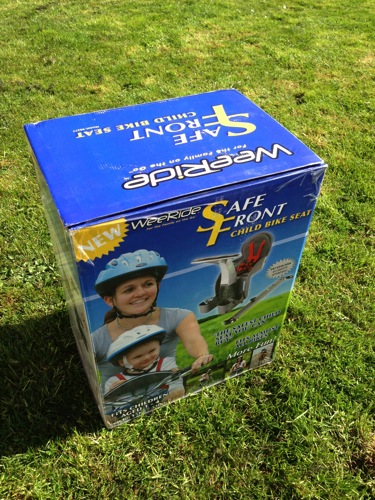 Opening the brightly coloured box sees 3 well packaged items, the seat itself, the mounting bar which attaches it to the bike and the  'resty bit' (more on that later).  I am not usually one for instructions, I  am after all a man, however I felt compelled to read them thoroughly as this is a review which someone might read and take notice of.  I can confirm the multi lingual instruction manual is comprehensive and easy to understand however if you are near an internet when you install the WeeRide, I would suggest watching the instructional videos on http://www.weerideuk.co.uk/Videos.htm  which are very easy to understand and will have you up and running in no time.

Almost no time…..   My first gripe with the WeeRide was that it was a little fiddly to install the bar that clamps between your seat post and headset, adjustability to any length of top tube was simple and they even include long bolts for those with oversize head tubes however with the nuts, bolts, washers, protective inserts and the clamps it takes a dextrous person to make light work of it.  Once installed however it felt very safe and secure and importantly did not foul the top tube running cables on this, my old 1980's race MTB (yes I still have it).  In order to attach the 'resty bit' (more on that later) to the seat itself, you will need a screwdriver, normally I would not mention that but the WeeRide came with the spanner and allen key required to attach the bar to the bike so why not include the simple third tool needed to complete the job? 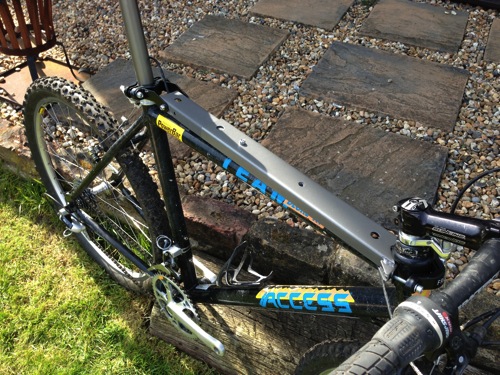 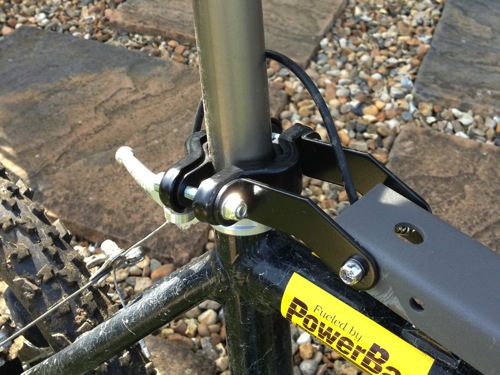 'Resty bit' attached (more on that later), the process of attaching the seat to the bar is so simple, a 6 year old could do it.  Very cleverly however not something a 1,2 or 3 year old could do.  The single thumb screw that attaches the assembled seat to the bar and therefore the bike, is between the child's legs but only tightens or loosens when pressed hard down (imaging a child proof pill bottle from the pharmacy) making it impossible for your little one to loosen it whilst on board.   The other advantage of this single screw design is that the seat can be removed and attached to another bike as desired (WeeRide sell the mounting bar separately or a pair bundled with the seat). 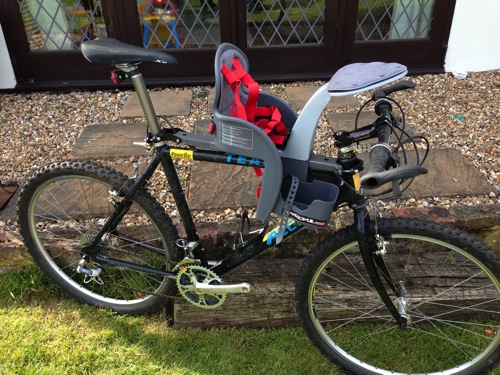 Final adjustments before getting Sophia in her new seat consisted of adjusting the 5 point harness and foot cups (which are height adjustable) to somewhere near where I thought they would need to be and for the observant amongst you, put some pedals on my bike.  I had a quick ride around and noticed straight away I would have to adjust my riding slightly as my knees would bang on the seat in front of me.  I was expecting this however and to be perfectly honest it's a small adjustment and worth it for having the child so close.

When strapping Sophia into the seat for the first time, I noticed another great safety feature. The buckle on the 5 point harness requires you to press 2 small red buttons before allowing the clips to be released, again making it very difficult for your child to make a premature bid for freedom.  Once strapped in and with her helmet on (there in lies a whole other story) we were off and I have to say both mine and my daughters immediate reaction were great. 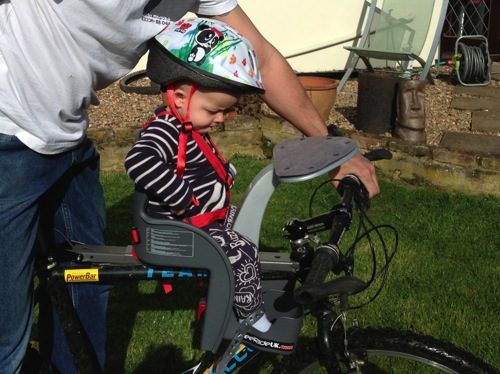 Having your child directly in front of you feels almost like they are sitting on your lap and although securely strapped in I also felt extra comfort that my daughter was between my arms as I held the handlebars.  In addition to the safety aspects, it is also really easy to see her face and interact with her, pointing things out and seeing that she is looking too.  As for riding the bike with the extra weight of the seat and baby it was noticeable but not difficult in any way.  I have ridden a bike with a handlebar mounted seat before and this felt unsafe as all the weight was over the front wheel and more importantly the steering.  The WeeRide does not have this issue and apart from knocking my knees a bit, the seat felt good.

Let's talk about the 'resty bit'

I am not sure what it is called, I was also not really sure what it was for however I can now say without a doubt that I am calling it 'the resty bit' and "It's an inspiration…. "  The pictures on WeeRide's website show a child asleep hunched over the resty bit which I thought was wishful thinking but my daughter did exactly that on one of our rides so it must be comfortable.  There are other uses for the resty bit too, as you can see from the pictures below.  It's a sleep rest, a toy shelf, a play table and I reckon you could mount guns on it too for shooting less considerate road users like the driver who knocked me off my bike the other day (thankfully without Sophia on board). 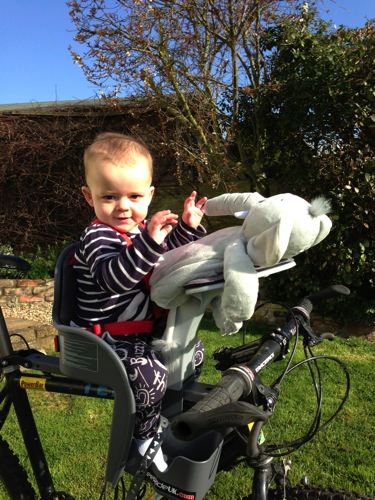 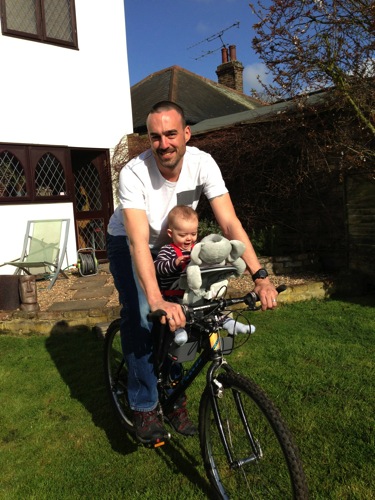 Overall the WeeRide Front Safe is a fantastic child seat for anyone who wants to have their child, not only on the bike with them but also in a position that is safer and provides more scope for interaction than rear mounted or handlebar mounted options.

The question that most of these stories (reviews) ends with is "Would I buy one?"   To that I can answer an emphatic "Yes"  I like the fact that my daughter is effectively between my arms on a seat that looks comfortable (hopefully she will agree when she can talk), holds her in nice and securely, can be simply moved between my wife's and my bike and most importantly has the versatile 'resty bit' for everything from a mid-ride power nap to the gunning down of inconsiderate motorists.  One day, I could even mount a laptop on it and dictate my reviews to her whilst we are out riding.  That, however may be some time off….. 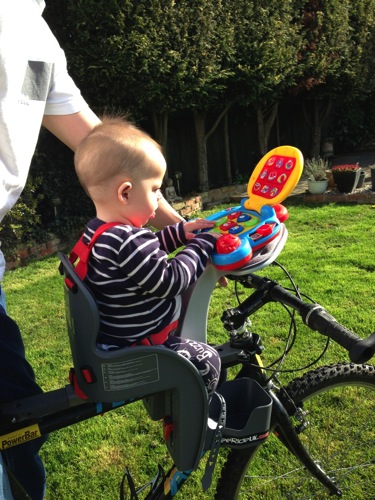 As mentioned at the beginning of this review, there are 2 versions of the Safe Front.  Whilst the 'normal' version I tested in this review is great and ticks all the boxes you would want, I personally would spend the extra 20 quid and go for the Delux version which has a little more padding on the seat, harnesses and 'resty-bit'.  In fact, probably the Delux + so as to get a second mounting bar and save a few quid off the combined price.

Wee Ride seats, along with a whole host of other child safety and cycling products can be purchased directly from WeeRide's website.  http://www.weerideuk.co.uk