Riding before you can walk

As an avid cyclist and being heavily involved with the Hadleigh Mountain Bike Club, I am forever having to explain myself to others (mainly my wife) why I need a certain type of bike or why I am constantly stripping and rebuilding one of them.. "You now have a mountain bike, bouncy mountain bike, road bike, BMX, your old mountain bike, spinning bike and some green thing with no saddle (trials bike)" is a regular but 'growing in length' comment in my house…  Not helped by the arrival last week of another bike frame and the reappearance of my old friend the Bamboo bike (http://hadleighmtbclub.co.uk/blog/?p=256) bringing the household bike tally to, of course, n+1 as it is and will always be..  (See Rule number 12 here - http://www.velominati.com/the-rules/)

What was not catered for currently in my collection however is a bike for 'she who can not yet walk'….  My lovely daughter Sophia.
After spending time with friends' kids and weighing up the virtues of balance bike vs stabilisers, I came to the conclusion that my daughter would never have stabilisers and balance bikes were the way forward and onward into the world of cycling.  The problem with this however (actually taking either route) is that kids who can't walk are not really catered for in the cycling world unless attached to mum or dad's bike.  We, as parents of the not yet fully mobile, seem limited to walkers and other 'sitty onny' multi wheeled contraptions that play annoying music and generally bleep a lot whilst scratching your beautiful oak floor….
"To the internet Batman", I am almost sure someone shouted in my head……
Some Googling later (other search engines are available, but they are not as good) I came across EarlyRider  http://www.earlyrider.com who supply beautiful wooden balance bikes for kids of 2ish and up (basically the ones that can walk and balance well) and I immediately decided to buy one…..  until I realised my daughter was 14 months old and could not walk or balance well..  About to give up and go back to surfing for new bikes and parts for me, I spotted the Spherovelo, an apparently unique bike for children aged 10 months and up and pitched as 'the perfect precursor to the balance bike".  Perfect…
About now, I would usually go about contacting the company, pitching the club and trying to form a relationship whereby EarlyRider might offer our members a discount and in return we advertise their products and I end up writing a review like this…  The problem however was that the Spherovelo looked so cool, I wanted one immediately and could not wait for the formalities so immediately ordered one from a reseller.
Oh how I wish I had waited…..
2 weeks after Sophia's Spherovelo was ordered, received, complained about, returned, received again, complained about again and returned again, I did what I should have done in the first place and contacted EarlyRider directly.  The ridiculously bad service I received from one of their resellers is another story but the subsequent service I received from EarlyRider directly has been nothing short of Fantastic.
Spherovelo #3 was delivered super quickly, directly from EarlyRider's warehouse, packaged, with instructions and a warranty card as shown below. 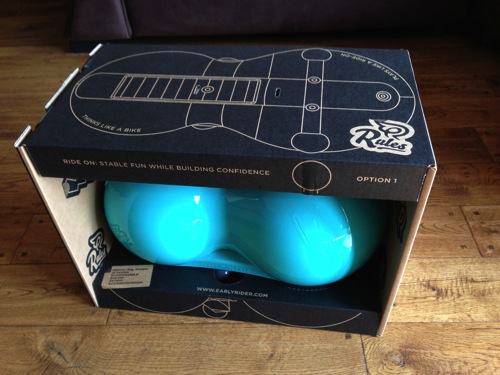 All this said, and you know I like a story, it's time to get into the review.
Opening the box reveals the well written and simple to understand instructions, a warranty card and a contraption that looks like a cross between something that belongs in a design museum and a green version of Marvin the Paranoid Android (also available in white…..    and blue and red)  Quickly however it all makes sense..  At the front is a large spherical, rubberised wheel that rotates on the same axis as a standard bike wheel, the rear houses a further spherical wheel which can rotate on all axises to provide manoeuvrability.  The ace up the sleeve of the Spherovelo however comes in the form of 2 small 'castor' type wheels which create a pair of small removable stabilisers giving this bike its versatility and making it apparently suitable for my very wobbly 'not yet walking or balancing well' daughter…
I have to say, I think the bike looks fantastic with a combination of the beautifully moulded lines of the plastic shell, the cushioned saddle and the wooden handlebars being a nod to it's bigger brothers in the Early Riders range.  The question is of course would Sophia like it and more importantly would she be able to ride it?
It would seem that Sophia's cousin, my brother's daughter, got there first and she loved it. She however is already walking so not my model student. 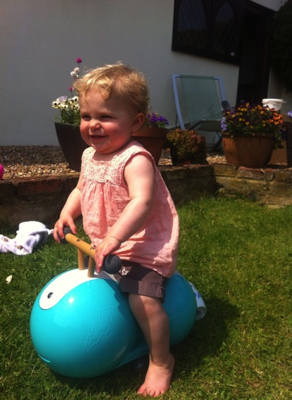 Once Nia had got bored however, Sophia decided to have a go and after a couple of false starts is now trundling around the house like she's in the Tour de'France 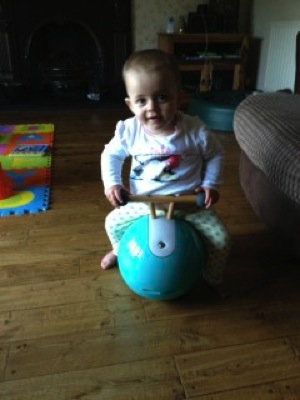 One of the great things about the Spherovelo is it's manoeuverability due to the rear wheel being able to rotate on all axises, Sophia quickly worked this out and instead of banging into the sofa every 2 minutes was managing to ride about quite happily missing 'almost' every obstacle.  The other good thing regarding the wheels is the size of them.  A problem with her previous mode of transport (a sit in, baby walker) was the small wheels and large grout gaps between the flagstones of our kitchen floor.  Not so with the Spherovelo as the large rubberised wheels provide her with smooth passage across pretty much everything both inside the house and in the garden.
After what was a questionable start to my daughter's and my relationship with EarlyRider caused by a certain reseller who will still remain nameless, I can now say hand on heart I would (and will be) buying from them again.  The Spherovelo is a marvel of engineering and form, everyone who sees it loves it and quite frankly, young or old, wants one.  I can't wait until Sophia is ready to take the 'castors' off and introduce her to the world of balance bikes for real.  Another reason for this is that when she is balancing properly, she won't be far away from me buying the next bike up in the chain, The EarlyRider Classic.
The Spherovelo is one I will be keeping however regardless of Sophia growing out of it.  It's a design classic to be shown off as well as ridden.  It will remain in my collection alongside whatever N+1 brings me next…
Oh……,  one more thing……..   I did work with them and EarlyRider are now offering discounts to all club members through an offer code which can be found on our members only forum.
Chris
We use Cookies - By using this site or closing this you agree to our Cookies policy.