The weekend started with a 5:30 wake up call to make sure we had enough time to get a good breakfast for the day ahead then get dressed and load the car with all the bikes and gear for the day, not forgetting our HardnutZ helmets for the training and racing. Once we had left the house it was a short journey to pick up Rob, then a rendezvous with Connor to head down to Thetford in a convoy.

After a two hour drive in the car and a lovely relaxing sleep we arrived but to our surprise we had arrived at an old farm, which the Tom Tom (satnav) had sent us too. So after asking people and going the wrong way a few times we finally arrived at fire road 24, which was the correct place and followed it down to the venue. We arrived and unloaded all that was needed for the day and got ready to be briefed by Steve Manser (Eastern Region Aspire Coach).

We got straight into a quick warm up and we were then put into groups and got on with practicing all of our core skills such as manuals, rear wheel lifts and powered front wheel lifts. This was because later on we had to compete in a duathlon consisting of a short circuit race then a skill for points.

The idea of this was to see who could perform the skills when under pressure and out of breath.

After a great day of perfecting skills and racing we set off to our hotel for the night, it was a short drive back to Mildenhall, a quick shower and then out for a nice steak and chips, then a few games of pool while the food went down, then an early night.

We arrived at the track at 7:30 to give ourselves plenty of time to finish putting the gazebo up and get our stuff and bikes ready. Soon after we set off for a sighting lap with Paul and made sure we took plenty of time too look at all parts of the course and what would be the best lines and tactics.

One thing we always think about is where and when we will have opportunities to take on gels and water, as this is crucial to race performance.

We returned from the lap and sat and relaxed in the gazebo making sure we had plenty of food and water.

As we did this many looks where received from people admiring our matching kit and helmets. 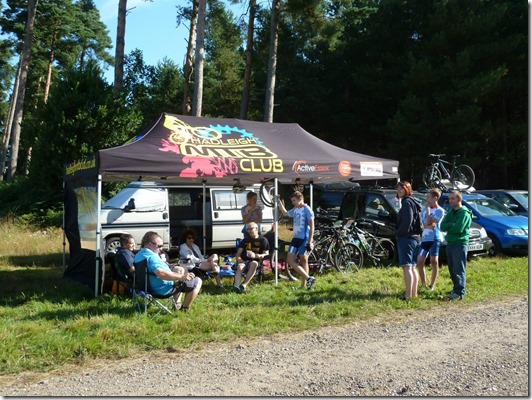 As it got closer to gridding it was time to start getting kitted up and ready to go, so I put my tube in my pocket, strapped the co2 canister to my saddle and headed over to the grid.

As I was called up I felt the adrenalin start to flow, 15 minutes to start, time to have a gel.

10 minutes to start, check everything.

5 minutes to start, everyone goes quiet.

Whistle goes... Sprint off the line... Gears clunking... Heart going... Start to get into a rhythm... Control the breathing...

For myself at least the race went very well, I had no problems with my bike and crossed the line in 4th place, which was my best result of the season and means I obtain a good amount of ranking points.

Connor finished in fifth which was his best result this year and the same goes for Harry who came in 8th.

Rob had a bit of an incident as at the start of lap two as he dropped his bottle so could not hydrate for two laps and to make things worse it was one of the hottest and driest races. He however managed to finish a respectable 10th in his category. 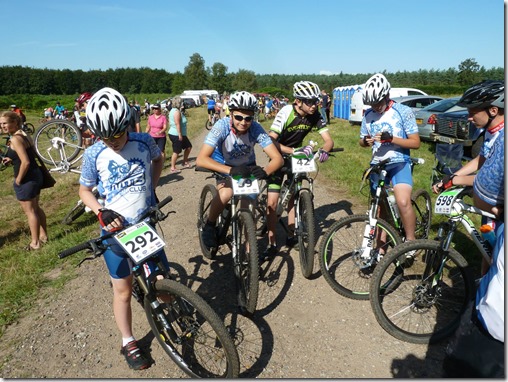