As we approached Shouldham Warren we crossed beautiful flat fields full of crops ready to be harvested. The sky was grey with a sun desperate to shine through. I arrived at 1:30pm as pre-arranged by Steve Manser to have a practise on the course ahead of Sunday’s race.

Shouldham Warren is nestled behind tiny Shouldham village, which opens up into this picturesque forest full of pine trees with pine cones covering the floor. The fire road leading to race site was made of very fine powdery sand. I couldn’t wait to get bike off the car and catch up with the others on the Aspire session.

After around 20 minutes of cycling around and trying not to be wiped out on the sandy corners I could hear the sound of squeaky brakes, which told me that soon I would see the Aspire group coming out the forest.

In the distance I could see the group coming around the last corner of the course at the bottom of the final straight. I met up with them at the grid to practice XCE (cross country eliminator) starts, which is 4-5 racers being held up by some-one and after the whistle it was an all-out sprint around a short lap. The last placed rider gets eliminated so the last person standing wins.

After this we when out for a lap of the track with Steve. Where we look at the track and see if we could find anywhere we could shave off time from our laps, around the lap we met the amazing people from Kings Lynn MTB club who made the track for that race which is one of the best tracks of the year so far, because of the spongey  single tracks, fast sandy fire roads and exhilarating steep descents. 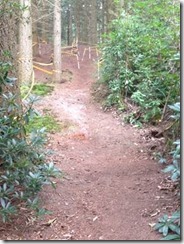 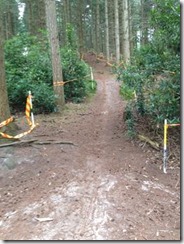 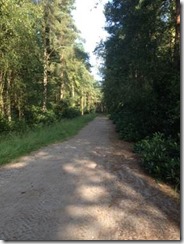 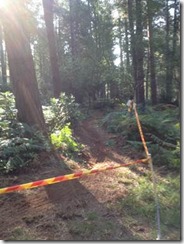 After the Aspire session we made our way to nearby Kings Lynn to find our hotel for the night. We had arranged to meet Harry Bates and his parents there and after settling in they arrived and we all sat down for an evening meal together and discussed the forthcoming race at length.

Time 7am breakfast consisting of a lot of pork products to get as many calories for the race. After the short drive from our hotel back to the Warren, the sun was shining. We rushed out on to the track to get warmed up and to show Harry around the track.

After we got back to the gazebo we had a final check of our bikes and a quick clean as the fine dust had covered the gear cassettes. Then off to the gridding line.

When the women had started their race the men started gridding. When everyone had been gridded the commissionaire gives us the two minute warning.

Looking at the starting hill…

Prepare to start in the next 30 seconds

Gears crunching, your mind set. A frantic dash up the hill from the start, the top riders disappeared into the distance.

For myself the race did not go to well with my rear valve had blown ¾ of the way around my second lap concluding in a long walk to the finish.

On my way down the final straight I see George and Robert racing down the final straight towards the finish line George behind Robert catching the slipstream, George starts to pull past and they collide briefly. Robert pulls away and crosses the line in an amazing adrenaline sprint finish. After a short time Harry crosses the line followed by Cameron. Back at the tent we talk about how the race went and who did the best. After we have had a chat we start to pack up our gear and the tent and begin the long drive back home.