The weekend started Friday night knowing that we did not have to get up at the crack of dawn to get ready, (like we usually do). There was no aspire in the morning as Steve Manser was setting up the course on Saturday morning so he could then run a short session in the morning.

11:00 am broke before we knew it and it was time for me to get some food down my neck and off to the aspire. We got to the aspire and got ready with Gary and Steve McWhinnie setting up. We started doing a session on our core skills (manuals, power assisted front wheel lifts and rear wheel lifts).

Before we knew it the aspire was over and it was time to head home, the time for practice and training was over. What we needed was a good recovery and plenty of carbohydrates inside of us.

The morning was upon us and it was now important to get up and prepare ourselves with a good breakfast and plenty of fluids as it was going to be a hot day. Gary arrived to pick me up and we then hit the road with an extreme amount of fog. 7:30 was our arrival with no one there at all. We were closely followed by Barry and Steve McWhinnie. We set up our stuff in the club gazebo which proudly shows our sponsors logos and just waited for the others. Once we were all set me and George went out for a warm up with the others closely following to make sure we had plenty of time to do our rollers.

We analysed the course and set about relaxing and taking on some more water and food. Rollers began with me, George and Connor on the rollers with Harry sitting on George's turbo trainer. It was time to grid...

The nerves kicked in as we all tried to relax and talk to people to keep our calm.

"Expect to start in the next 15 seconds," everyone hunched over controlling the breathing... And GO the sound of the whistle broke and everyone was off heart pumping faster than ever, gears clunking, legs burning...

By the end of the second lap George was in second with him catching Troy the whole time. He eventually made the pass to take the win by six seconds from Troy and win the u14s race which was the first podium for the club's Youth team. As a result of the win George came third overall in the standings which the club's second podium of the day. Connor came in a good solid 5th and Harry in joint 8th with Cameron McWhinnie in 12th and me (Robert Staines) coming in 9th in the older category. 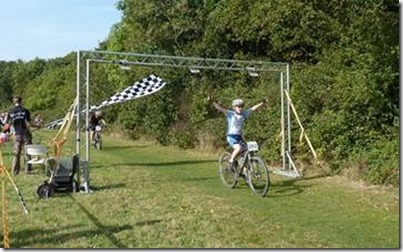 We got back to find all the amazing support that everyone from the club who came along was giving the team including the star of the show David Britney and crew for all the amazing food and drinks that he had prepared. A big thank you to Matt and his team for a fantastic Mud Sweat & Gears series this year and we are already looking forward to next season. We would also like to thank Rubena Tyres and Hardnutz Helmets for their support this season. 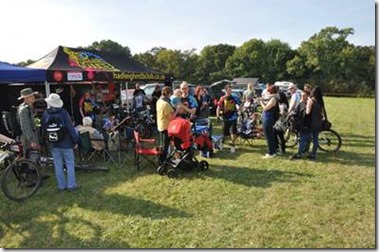