The weekend started for George and I with the Aspire on Saturday.  We got to the track nice and early to help set up the course before the Aspire started.  The Aspire started at 10.00 and we focused on core skills for example cornering, front wheel and rear wheel lifts and pumping.  In the afternoon session we rode the course with our coach and looked at the features ready for the race on Sunday.

The course was very different to how we had previously ridden it, Matt and Graham had made the course harder by adding in more climbs.  It had some interesting sections but was very fun and enjoyable to ride.  Once we got back from the pre-ride we thought about tyres for the race on Sunday.

The day of the race arrived and we got to the course early so that we could ride a lap just to check if there had been any changes from the day before.  We were joined on the ride by Harry and Connor.  We got back to the event village to find we had been joined by several other members of the club who were also riding in the race.  We welcomed them to the Gazebo and talked about the race ahead.  The time soon came round to warm up on our rollers and get to the gridding. 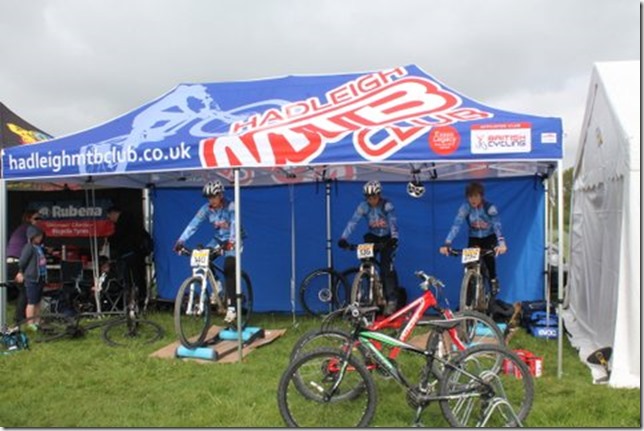 We were gridded ready to start at 10.00.  The ladies and girls went off first, followed by the Youth and Juvenile boys, then the open men.  The whistle blew and we were off.  Harry unfortunately broke his chain on the start but he made it to the technical zone and was able to repair it with some help.  But, in doing so he lost valuable time.

The race was extremely hard as the sun was bearing down on us throughout the race.  This made it almost unbearable at times but we managed to pull through.

The race was won by Daniel Tulett who is the current National Champion second was Harry Yates who is on the ODA so we were up against a very strong field.  I finished in 8th, George came in 12th, Connor was 16th and Harry was 20th.  George was competing in his second race of the season after his thumb injury.  There were several other members of the club who raced in the morning all doing the club proud. 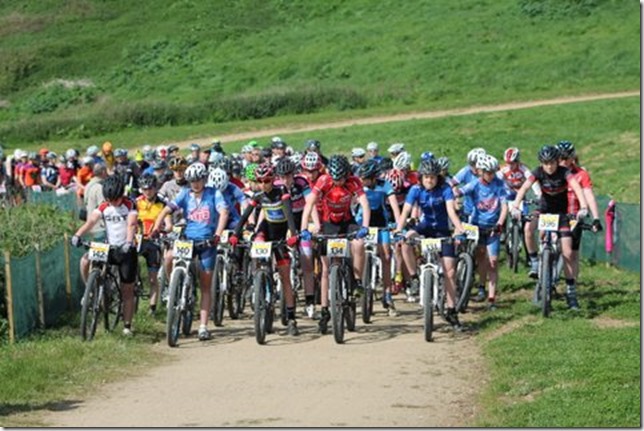 We then watched the under 9 race wher e the club were also represented and the riders again did the club proud.

We stayed to watch the afternoon race which made a change for us to be watching rather than racing.  The race was very hot and as a result was a very hard race.  The club was again represented by several riders who all did well.

There are so many people to thank, all the volunteers who marshalled and helped set up the course and the event village, without you the event could not happen.  David Brittney and family for the hotdogs and cake.  Also thank you to all the supporters who came and watched the races.

Thanks go out to our sponsors particularly Matthew Lane from Rubena Tyres for his advice and guidance, it's great to see him come along and give us his support.  Also thanks to Duck Smart for the cleaning products and Hardnutz Helmets for our helmets.

Also thank you to all the coaches for the Aspire session and particularly to Steve Manser for his hard work in arranging it.  Also thanks to Matt, Graham and the MSG team for all their hard work in organising the event. The event was a huge success and we are looking forward to the rest of the season.