Early start again for the 100 mile trip to Fire Road 24 at Brandon in deepest Suffolk.

Journey was however rather pleasant with an early morning warm breeze (which makes a nice change).

Gazebo’s erected in the usual manner (after a bit of removal work) and those riding the morning race, went off to carry out their personal reccy of the course.

On returning, the discussion was had around tyre choice and as most had opted for the Rubena / Mitas Scylla and it was decided to remain on this compound, as conditions were dry and demanded a tyre that could grip in the corners and give free rolling straight line speed for the fire road sections

Lads bikes all looked nice and clean which is thanks to another of our sponsors in the form of Duck Smart.

So time to get loads of fluids in before the 10:00 guns….and 4 laps of the forest and the terrain in front…. 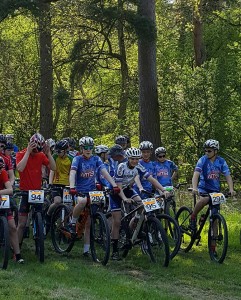 Off 1st were the U16 and U14 (Youths and Juvenile) and with around 7 riders all looking rather smart with the majority in another of our sponsors helmets. Thanks to Hardnutz for keeping them safe when they do fall off (as they do on quite a few occasions!!).

Lap one saw George Crocombe come through in 2nd place, then followed a train of Youths which gets rather hard to distinguish and feed water to when they are bombing past!!

As the race went on the field spread out and some riders were caught up on the single file tracks, but as this applies to all – its about their race craft at this time to get around those slower.

After an hour or so, George came through  to take 2nd place in the U16, which now gives him a 1st and 2 second places in the series.

Following George for Hadleigh were Harry Bates (9th), then Connor May (11th), Matthew Darley (15th) with Harrison having to pull out after 2 laps due to feeling under the weather. Harrison did however place 18th.

In the U14 category, Joe Champness came in 8th with Adam Cavella taking 18th. Both lads are 1st year U14, so good solid results.

I unfortunately left before the afternoon events, so cannot comment on how the race went for the U18 lads, other than looking a the results to see we took 3rd, 4th and 5th positions,. With Jake Darragh claiming the final podium spot.