Sunday 26th February was the long awaited first race of the 2017 Mud Sweat and Gears season. After what has felt like a long winter of training the summer race series is finally here and all the unanswered questions, such as have I trained hard enough to improve on last year, and how hard have my fellow competitors been training while hidden away in garages and sheds on turbo trainers, would be answered very shortly. I had missed that routine of preparing all my kit on a Saturday evening and loading up the car ready for an early start the next morning, but it didn't take long to remember which items I needed to pack and prepare. Race day arrived quickly, and after a bit of breakfast and coffee I was in the car at 6:30 for the hour long trip to Lee Valley Velopark where MSG were calling home for the day. Last year we were blessed with blue skies and warm temperatures, but the grey clouds were gathering as the sun came up and it didn't look like it would be as nice a day for spectators, but the lower temperatures would probably be better for us riders. 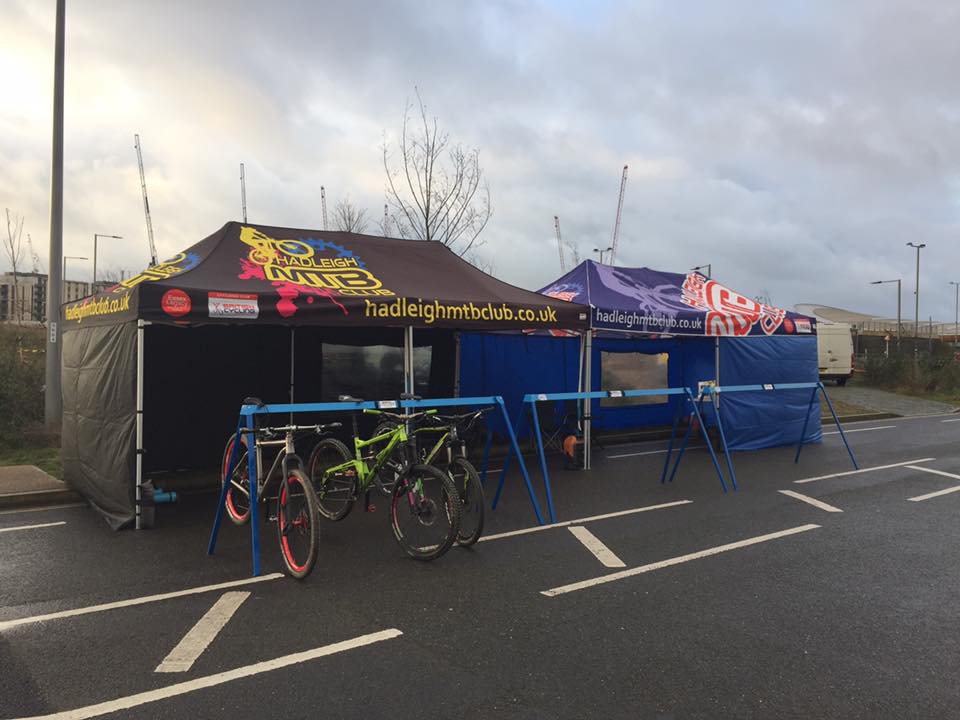 I was one of the first riders to arrive and went to help set up the club area but the extremely efficient Mr Crocombe, assisted by one of our resident Commissaires Paul Coulson, already had the gazebos up and the bike racks ready for us, so there was very little to do other than chat to fellow riders as they arrived. It was good to see so many Hadleigh members & families milling around the arena, and it was the first opportunity to catch up with friends from other clubs who we hadn't seen since the last races of 2016.

Paul Cavalla had kindly collected our new Hardnutz MTB helmets from Chris Hyde the previous day, and he dished them all out to the main team riders when he arrived. The new helmet is much more comfortable than the previous one, and in my opinion it looks a lot better too. After a few moments to make adjustments to the straps on the new lid I headed out for a practice lap with Sue Wood and Paul & Joe Champness and we spent plenty of time looking at the A and B lines as our experience last year told us that some of the B lines could be faster in the race. The course was pretty much the same as last year so it didn't take long to get the lines and remember where to pre-select gears etc. 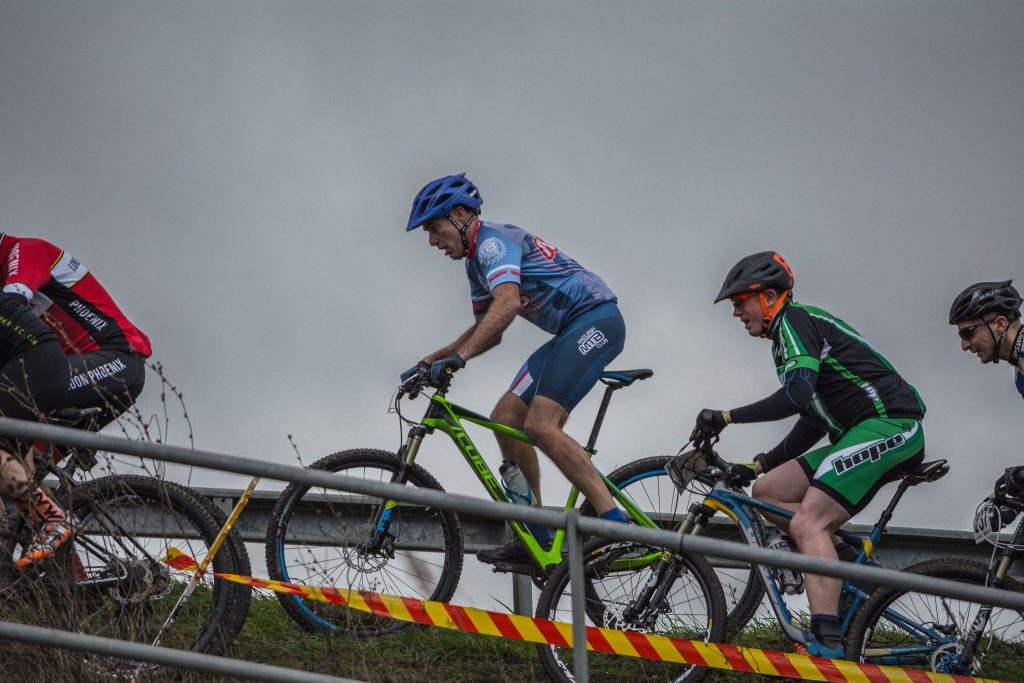 Since I had such a poor 2016 with reliability issues and punctures, I wasn't gridded for the open race, but I managed to loiter near the front of the main group and nab a place on the first line of non-gridded riders alongside fellow Hadleigh riders Michael Millham and Chris Dewson. It was great to have a sea of blue and white Hadleigh jerseys visible in the group of riders around me as the excitement and anticipation started to grow.

After a short speech from one of our other resident Commissaires, Adam March, we were off. I had a good start and the first part of the course was wide and fast so I was able to push a big gear and make up quite a few places before we dropped into the single track sections for the remainder of the lap. There were a lot more riders on course than in 2016 and in no time at all we were catching the back of some of the youth riders. The track at Lee Valley isn't the best for overtaking and it was hard to see someone you were racing with pulling away from you until you found somewhere that was safe to overtake, but that is racing and everyone had the same issues. It just meant you had to work a little harder to catch that rider again when you got by, and the chances are they would get caught behind someone before too long so it gave you a chance to close back up. 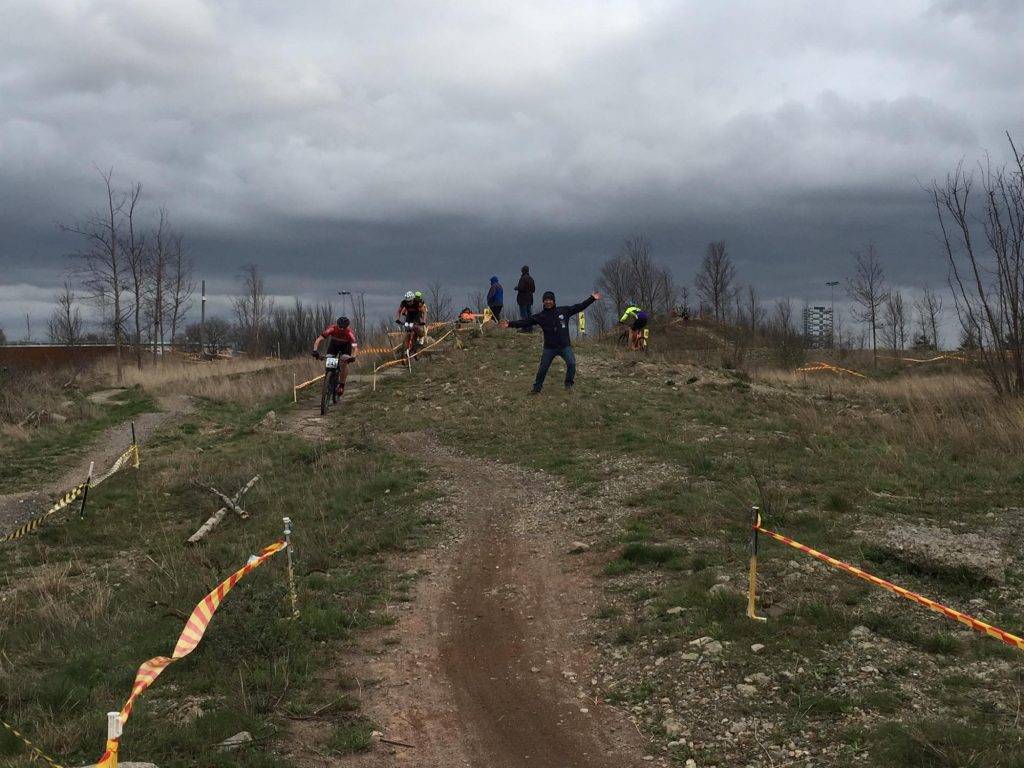 I was racing closely with Lindley Gales from Kings Lynn MTB club and another couple of riders for most of the race, gaining a few places here and sometimes losing them again a short section later. In previous seasons I would fade away towards the end of the race as I simply didn't have the fitness to keep up the tempo, but the winter training from team manager Kevin Darragh has proved invaluable and I was able to keep the pressure on those in front. I finished the race in 11th place, which although only one place better than last year, I was more than happy with considering the field. It was great to cross the line and find that Mark Darley had finished in 3rd place in my open category, and both Sue Wood and Jane Brockman had got 2nd place in their respective categories too! As usual after a race everyone headed back to the club gazebos to chat about the highlights and get changed ready to watch the under 12 and under 9 races that followed.

I love the track at Lee Valley, but I felt like this year was a victim of its own success and there were just too many riders for a course of this kind. I'm not sure if MSG will be back there again, but if they are I will certainly sign up as you always leave with a smile on your face.