Back at the end of last year I was sat in a hotel bar in Copenhagen when I received a call from a friend that lives in Austria. He invited me over to have a go at a marathon XC race local to him and after a quick check with the wife for permission I was signed up for the B race before I knew it. It was only the next day that I realised what I had signed up for as the B distance is a 119km off road race through the Austrian Salzkammergut mountains with just under 4000m of vertical climbing. The only consolation was that I hadn't entered the 220km (over 7000m vertical) A distance event.

Just to put that 4000m into perspective, if you start on the gravel track at Hadleigh that runs down by the train tracks and climb up to the top of the hill past the top of the rock garden, you will have climbed a little over 50m. Now do that 80+ times.

The Salzkammergut Trophy was to be my main target for 2017 and my winter training started off well. I lost the weight I wanted to and started the season fitter than ever, but as the race loomed closer my endurance training ride goals slipped by and 2 weeks out I felt hopelessly under prepared. This was exaggerated even further when I sent my forks and dropper post off for a service at Sussed Out Suspension and Royal Mail managed to lose them for a week so I didn't get the bike back together until the weekend before the race. Then when preparing the bike for travel I found one of the pedals to be seized onto the crank arm, but luckily Grips bike shop came to the rescue and managed to remove it without damaging the carbon crank.

I didn't get the chance to give the bike a proper shakedown and test the suspension before packing my bike bag (rented from Traversbikes.com) so this would have to wait until I got to Austria and fingers crossed everything would work ok.

In order to get the approval from the boss to go to Austria I had to make one major concession, and that was to take her and the little one with me for a "holiday". Luckily I have plenty of air miles from travelling with work, so I manage to book us some business class seats on BA. 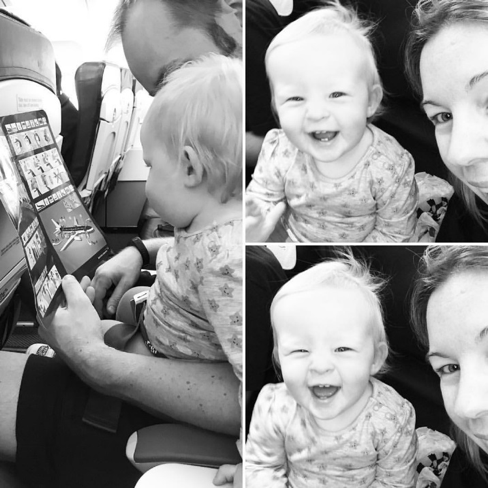 We aren't a family that tends to pack lightly as it is, and with a 13 month old and a bike we were at the limits of both our baggage allowance, and what can be fitted inside a Vauxhall Insignia estate hire car. At least if you take EVERYTHING on holiday with you then there is less chance of forgetting something! 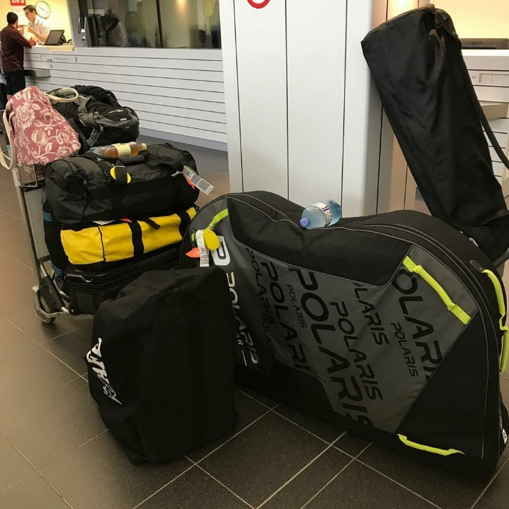 We all arrived safely in a wet and rainy Austria a couple of days before the race. Luckily the weather improved the next day so we were able to see a bit of the amazing scenery in the surrounding villages and towns, as well as try out the amazing open air swimming pool in the village. The water was nice and warm but we had the pool to ourselves and I’ve never had such wonderful views while swimming. 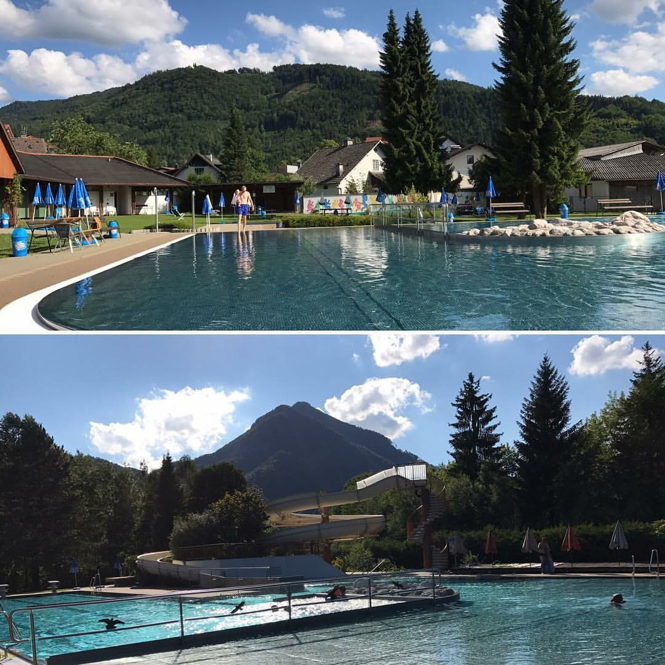 The day of the race was soon upon us. We knew from the weather forecast that there was a strong chance of rain for most of the day, but I didn’t expect the amount of rain that fell during the 12 hours before the start. We arrived in the small village of Bad Goisern at about 7am to find it feeling deserted. The A race had started at 4am and all the spectators and teams had retreated back to the warmth and dry of their accommodation so the town had an eerie feeling about it. All of the B distance competitors seemed to be waiting until the last minute to show their faces and try to start the race as dry as possible. We went to sign on and collect our race numbers before finding a little café and grabbing a couple of coffees while we watched the rain fall. I must admit at this point I really didn’t fancy getting into my kit and starting a long ride. It can’t have been much more than 10°C and I wasn’t relishing the prospect of being wet and cold for most of the day.

After a bit of mutual encouragement we pulled our kit together and assembled ready for the 9am start. The rain seemed to be easing up a little so everyone’s sprits were lifted slightly and the anticipation grew. 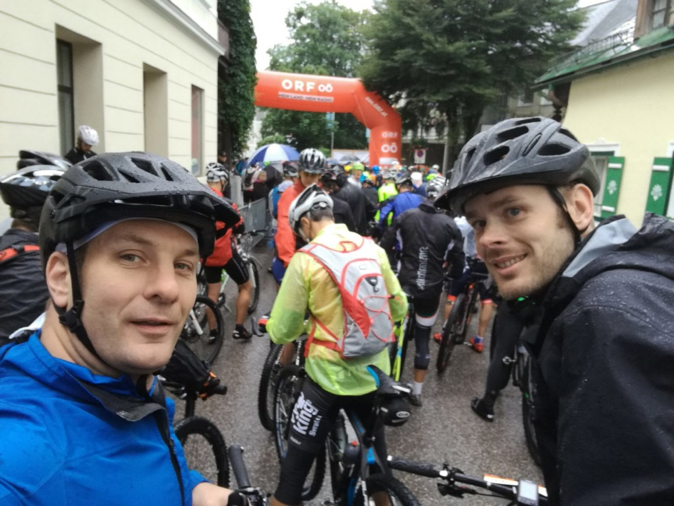 At 9:05 we were off in the second wave. I am used to the start of a race being a hectic mass of bodies, all trying to squeeze through the smallest of gaps and vying for position. The start of this race in contrast was a relaxed affair with competitors casually chatting to one another and gently following the procession through the town, knowing that there would be a hard day in the saddle ahead of them so fighting for position now would be worthless. Then the climbing started…

I knew that with 4000m of climbing in the race there would be some brutal climbs ahead, but to hit 10%+ gradients within the first few minutes was a bit of a shock. The gradients then slackened off slightly, but the hills went on and on and we covered barely 7 miles in the first 2 hours of riding. The reward for all this climbing was some pretty decent descents, but when you are knackered from the climb and in temps around 3°C at the top, they were punishing on an XC bike. The first descent alone was over 20 minutes long and I suffered from arm pump and cold / numb fingers for most of the way down.

Close to 40kms into the race I had a mechanical issue that almost ended my day. I had chain suck due to the amount of mud in the drivetrain, and the over tensioning of the chain had partially ripped off the small tab on the rear mech hanger that the mech limiting screw sits on. The mech was now contacting the cassette and wouldn’t last long. Luckily I was able to reset the mech position and the small bit of tab remaining on the mech hanger managed to hold on for the rest of the race. 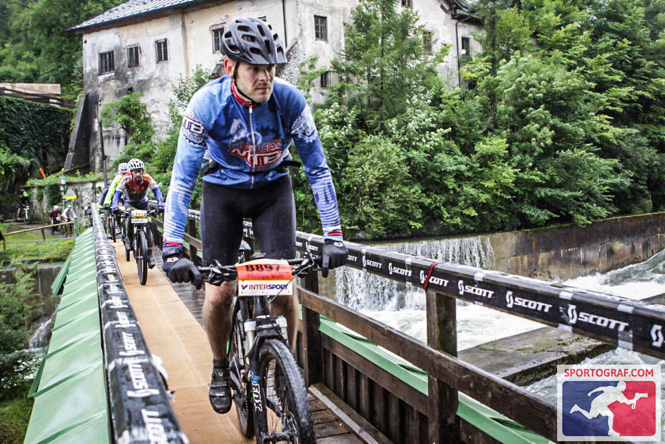 The hardest part of the race was the climb up the mountain behind the village of Halstatt (one of the places where the sound of music was filmed). The trail followed an old miners track up the Salzberg mountain for 1000m. The first switchback section was hard enough, but the tarmac road at the top was so steep that no-one managed to ride it. I was slipping in my shoes on the hard surface when pushing the bike up the last super steep bit and I have to admit that I did have a bit of a sense of humour failure at that point. I thought I had died and gone to hell at one point as this chap was walking down the trail in front of me, but he only had words of encouragement (I think so anyway as he was talking in German) 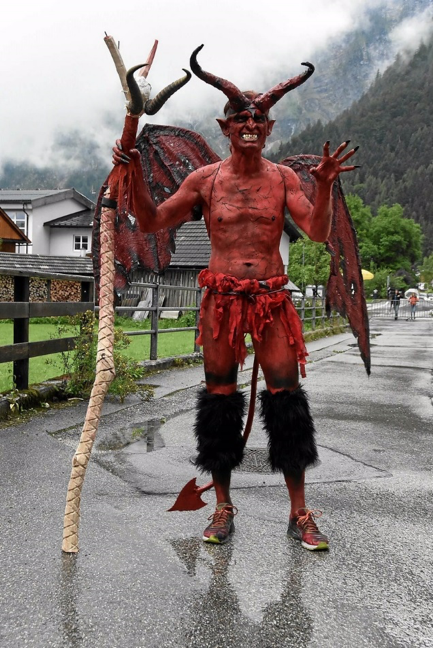 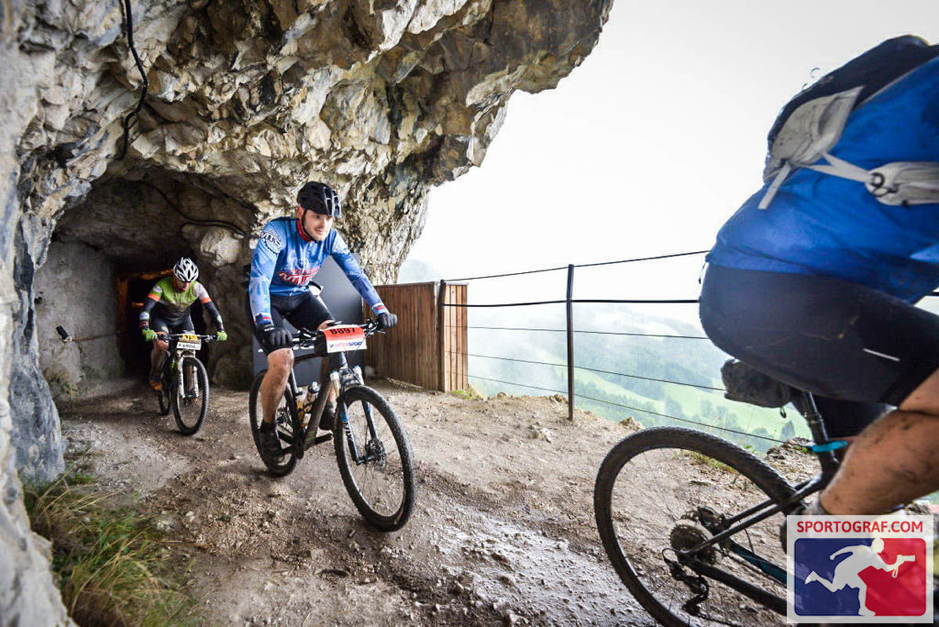 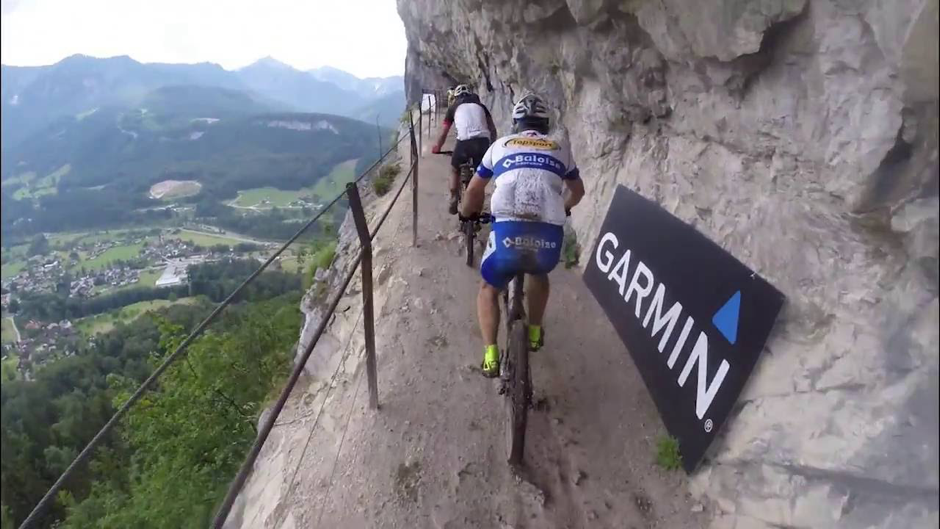 The only way I was going to make it to the finish of the race was by eating and drinking correctly. Luckily the race organisers had laid on some fantastic feed zones, and the smoked sausages and cheese went down particularly well. I managed to pace myself nicely through the day, spinning up all the climbs and taking on food and drink regularly so I didn’t bonk in the later stages of the race.

Eventually we crossed the line after a gruelling 10 ½ hours out on the bike (8 ½ hours moving time). I was expecting to be absolutely ruined, but all things considered I felt pretty good. My bike and body made it through the hardest ride I have ever attempted, and most importantly of all I managed to avoid the broom wagon! I enjoyed the experience of racing in Austria but I don’t think I will be back for another go in 2018. 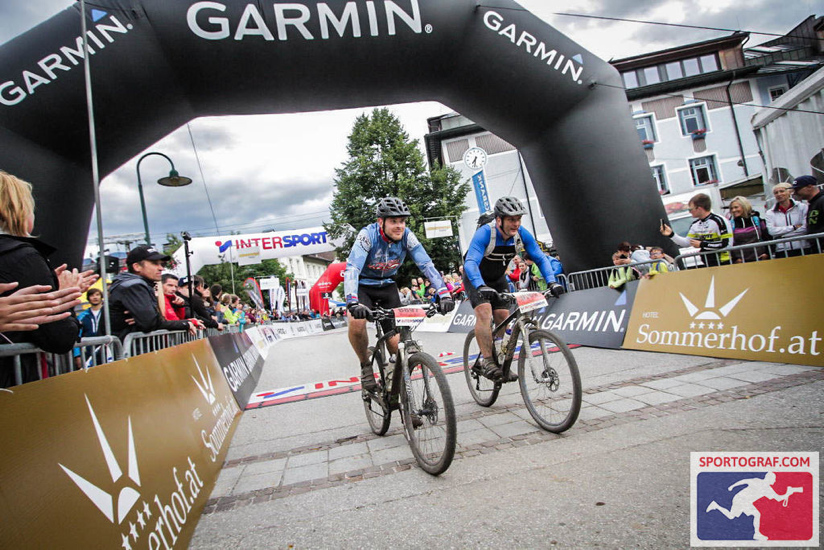 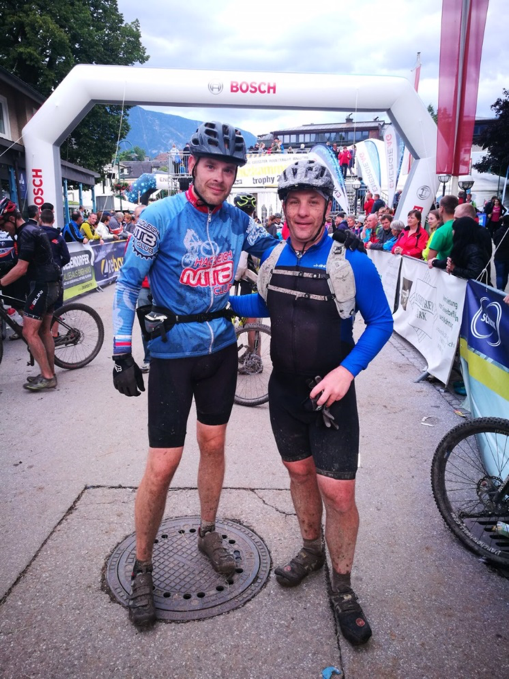