So we finally get to the last race of the series, (although far too quickly).  This was held at Langdon Hills, nice as its a local one for us.  There was a Cycle cross race held on the previous day which, along with a bit of rain, made for some wet muddy and slippy conditions.

The series standings had been sorted and added up, and I was lucky enough to find myself in second place overall!  It looked like that there was a podium finish for the series, but it just stood as to weather it was a second or third spot.

Once everyone had arrived and got bikes sorted, we headed out for a practice lap led by the youths.  This proved the conditions were a little more treacherous than expected, especially the climbs.  Unfortunately Matthew, racing for the youth team, acquired a flat tyre, so it turned out to be a rush back to the arena and get that sorted for him so he could start the race.

So, flat tyre all sorted, and now time for gridding……as we were waiting on the start line, the sun came out nice and bright. Lovely.

Off go the girls and ladies, then the youths.  Now our turn, straight off the start line into a steady incline leading to the first steeper climb, getting nice and churned up by now.

It was about halfway through the first lap that we started to catch some of the slower riders, which made good sideways fun on the climbs and decents.  There were some good skilled riders who managed to hold speed through the mud.  Because of the conditions the organisers dropped a lap from us, from 4 to 3.

Coming through on lap 2, with one lap to go, it was an all out go for it battle.

I found myself having a battle with the rider who was in third position overall, thinking i had to beat him to finish second.  At this point in the race, i was in about 8th or 9th position, so unfortunately no podium for this race, but still in contention overall.  I had a big sideways moment on one of the climbs, just as he passed me…..time to run and chase.

He hit the last downhill a few riders in front of me, and try as i might, I finished two places behind in 9th.  Thoroughly enjoyed the race, both me and the bike covered in mud.  Thankfully everyone got round with no injuries.

Now, once everyone had finished and had a drink and a post race chat, it was time to check on the results.  Yep, i finished in 9th, two places behind Steve.  I believed that was going to be a third place overall, but need to wait for the final count up. 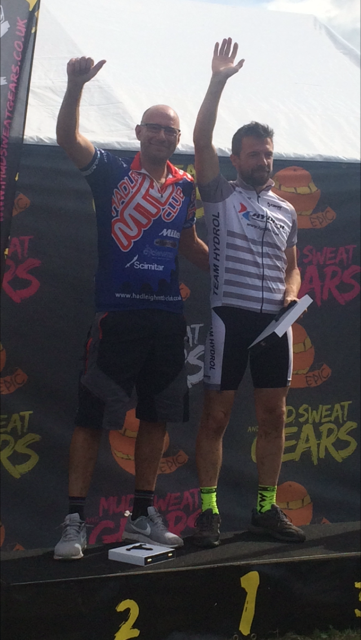 When it came to the podiums for the series, Steve was called up in third.  WOW! That meant a second place finish for the series, so chuffed.  I would like to thank The MSG Team for putting on such a well organised great series.

I have had great support from the Haleigh MTB Club throughout there series.  A special thank you to Kevin Darragh for the training tips and race support.  Special thanks also goto the awesome club sponsors, Scimitar, Mitas and Hardnutz.

Now its time for a well earned couple of weeks rest until the winter training.  Looking forward to racing for the club next year.